These days, his weathered hands spend more and more time in his lap. And when you look at his soon-to-be-94-year-old hands, you wish they could talk. Time may have sandpapered the rough callouses, but the scars tell you: “These hands weren’t always idle.” In fact, those farmer hands built the house where he lives with his wife of almost 72 years.
Their family would eventually grow to six with two sons (Tim and Ray) and two daughters (Pam and Krista). In between plowing, planting, cultivating and harvesting, he kept remodeling and expanding their home, which sits on a dirt road, 10 miles from the nearest traffic light or loaf of bread.
By the time he picked up his first hammer, his hands were well-acquainted with blisters. He might have been 10 when his daddy had him guiding a mule up and down the rows of cotton, tobacco and corn. In that Depression Era, he was a skinny boy but sinewy strong. 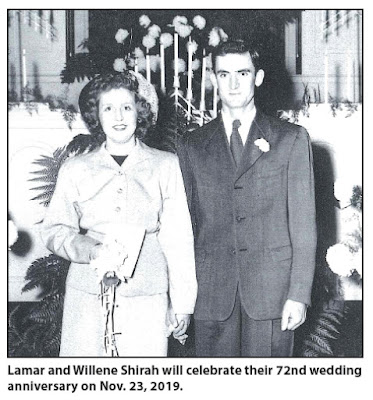 When the Japanese bombed Pearl Harbor, he laid down his plow stock and picked up an Army rifle on the way to the Philippines. Big brass recognized his farm-boy toughness and chose him to drive a general’s Jeep and provide the officer protection. And when the Japanese surrendered, he came home to hitch his mule again. In time, profits would buy the first tractor.
But when people weren’t talking about the just-over World War II, they were clamoring about a football phenomenon at the University of Georgia. Sports talk was abuzz about do-it-all Charley Trippi.
Maybe the mules wouldn’t mind a break if the farmer went to Athens for a game. And that’s what he did with some buddies. He doesn’t remember much about the game or how many points No. 62, the future college and NFL hall of fame member, scored. He can tell you in vivid detail what happened—halfway home—at a traffic light in Fort Valley.
Beside his car was a carload of young ladies. One particular brunette captured his attention. He invited her to ride around with them. And she very properly said, “My parents don’t allow me to go with strangers, but you are welcome to follow us to my house. I can introduce you to them.” To her surprise, he and his buddies followed her home. That’s when the pretty bookkeeper for Blue Bird, the school-bus maker, realized that she didn’t even know this fellow’s name.
And that’s what happened 72 years ago.
Not long after that happenstance meeting, there was a Peach County wedding.
When her parents rattled the Mitchell County washboard road to their son-in-law’s farm for their first visit, her successful-businessman daddy said, “It must be love, Sister, ’cause there’s not another @#%* thing out here.”
The newlyweds were living in a two-room sharecropper’s shanty with an outhouse in the backyard, under the big oak tree. Their tiny, rusty-tin-roofed, unpainted abode, squatting on field-stone pillars, was an island in the middle of hundreds of acres of cotton and peanuts. Whatever furniture they had, the groom had built, including cabinets made from shipping crates.
But the husband—with calloused hands—made a promise to his 20-year-old wife, “I’ll build you a

house.” Indeed, he did. And in that rambling two-story farm house, under a canopy of pecan trees, is where