Emily was just old enough to go—with a friend—to the Sanford Stadium’s ladies restroom.  When our pigtailed daughter returned, her blue eyes were as big as ping-pong balls.  In her dramatic South Georgia drawl, Emily gasped, “Daaaddy, you won’t believe what I just saw!”
She had witnessed: Where’s there’s a will … there’s a way to smuggle whiskey into the Georgia Bulldog football game.  A brown-liquor-thirsty fan had used an ace bandage to strap a bottle of booze to her thigh.  The woman had hiked her skirt, freed the bottle and poured a stout shot into her Coke cup.  When it comes to squeezing past the rules, there’s no limit to the ingenuity.
I told Emily about what I saw during my UGA college days.  A creative drinker put his whiskey into a hot-water bottle under his shirt and ran the tube up his sleeve to his neck.  When he wanted a sip, he put the end of the tube in his mouth and pressed the rubber bottle under his arm, and presto.
I repeat: “There’s no limit to ingenuity.”
And that brings me to vaping. 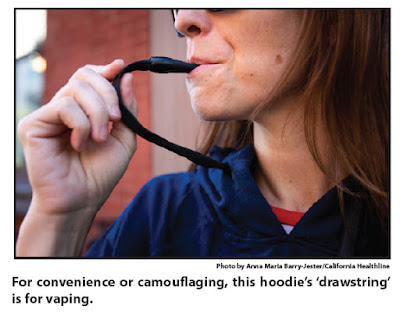 Growing up inhaling secondhand smoke, I know something about the powerful pull of nicotine addiction.  Praise the Lord, Big Dink and Margie eventually put down their packs of Winstons and menthol Kools.  Their grandchildren never saw them light up.
And today, my parents’ great-grandchildren are growing up in a generation that is fraught with new temptations.  The sun doesn’t rise that I don’t pray for their strength to say “no” when a friend says, “Hey, try this.”  Peer pressure is notorious for trumping good judgment.  That’s why researchers are telling us vaping is introducing nicotine and marijuana to kids as early as 12 years old. I understand adults having the privilege of choosing personal vices, but we are talking about kids—kids.
Not all youth are vaping, but new data say that 25 percent of high school students have vaped in the past 30 days.  That’s up from less than 12 percent just two years ago.  That’s shocking enough.  But get this: According to the Truth Initiative, an anti-tobacco advocacy group, an estimated fewer than half of middle-school and high-school teachers recognize the most-used vaping devices. I wouldn’t, either.  Crafty designers and marketers are three steps ahead of teachers, parents and grandparents.  And sales are exploding.
Even the revelations are frightening, setting aside—for the moment—the reported health hazards and growing number of deaths believed to be linked to vaping.  Now, consider these examples of clandestine vaping devices which are designed to hoodwink those of us who are clueless about this craze.


But I know this.  Prohibition might have outlawed alcohol for a while, but it didn’t stop Americans from drinking.
And I know this, too.  Better regulation of what’s being vaped is needed.  But what will help most of us is to be better- educated about vaping.  Laws can only do so much because ingenuity is a testament to “where’s there’s a will, there is a way.”
In 1985 Emily got an eyeful of that lesson.