With a brand-new driver’s license and Big Dink’s teal-blue Buick, I coasted into the yard of the weathered, lapboard-sided farmhouse. When the screen door creaked open, I was expecting a striking blonde to step onto the lofted porch. Instead, a 2-year-old toddler—with a face full of smile—greeted me.
“What’s your name?” I asked.
“Herschell,” he said.
With one hand, I tousled his black hair. With the other, I handed him a bright-yellow pack of Juicy Fruit gum. And then the hinges creaked again. Yolanda (everyone calls her Tootsie) the oldest of the five Hires daughters, joined us. As my date and I were pulling away, Herschell was peeling the foil off his third piece of Juicy Fruit.
That’s how our friendship began 55 years ago. Today, that 1964 toddler has a salt-and-pepper beard, a wife, two daughters and three granddaughters. The businessman is chairman of the Wayne County Board of Commissioners. 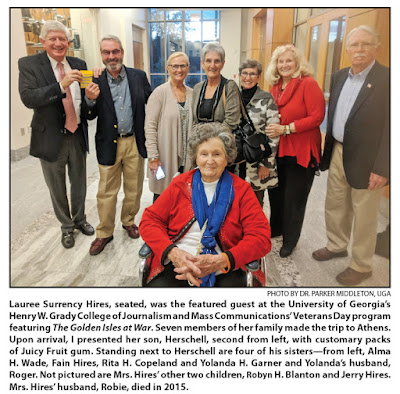 On Veterans Day, Herschell Hires chauffeured his soon-to-be-95-year-old mother, Lauree; four of his sisters; and a brother-in-law to Athens. The University of Georgia’s Grady College of Journalism and Mass Communications had invited Lauree to tell her World War II story. Her remarks followed the viewing of the award-winning documentary The Golden Isles at War, produced by Grady grad Kevin Maggiore.
Here’s an excerpt from my introduction of Lauree Hires, a real-life Rosie the Riveter:
“When I think of the Greatest Generation, I think of the children—including my parents—who fought the odds of the Great Depression only to battle their way through World War II and win again. Wayne County’s Surrency sisters—Carobeth, Nanelle and Lauree—didn’t wield rifles with bayonets to defeat the Germans and the Japanese. They welded their way through the war with torches and welding rods to build Liberty ships in Brunswick’s port.


“And no one toiled harder or sweated more to support America’s war cause than these ladies and their peers. For generations, our families—Surrency, Highsmith, Bacon, Hires and NeSmith—have been closer than friends. We are as close as you could be and not be family. I am blessed to have grown up in Jesup and benefited from the inspiration of these hometown icons of the Greatest Generation.”
I wish you could have heard Lauree Hires. But you don’t have to be left out. The new World War II Home Front Museum on St. Simons gives you a front-row revisit to this chapter in Georgia’s history. With interactive videos you can listen to Lauree Hires and Carobeth Highsmith recount their war years. If their sister, Nanelle Bacon, had lived a few more years, she would have been included. 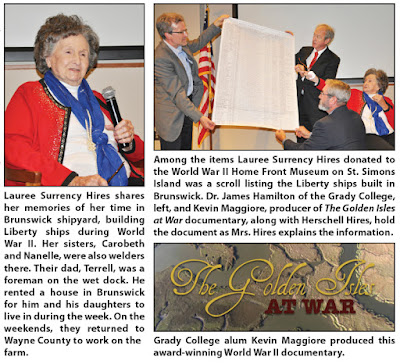 However, the Surrency sisters almost missed the documentary, too. Call it fate or a stroke of luck, but here’s how Kevin Maggiore discovered Carobeth and Lauree. David English, a superintendent of Herschell’s Dogwood Construction Group, overheard ladies working in the soon-to-open museum. Apologetically, he interrupted, “I know where you could get some things to display. Call my boss, Herschell Hires.”
One of the curators dialed Herschell and asked, “Do you have some Liberty-ship memorabilia?” He said, “No, but my mother does.” On the other end of the phone, Herschell heard a gasp and then, “Your mother, is she still alive?” Laughing, Herschell said, “She sure is, and her sister, too. They both worked on Liberty ships.” Within a few days, Lauree and Carobeth were in front of Kevin’s camera at Altamaha Baptist Church.
His mom and aunt are featured in The Golden Isles at War, but Herschell deserved some recognition for his contribution. So when he escorted his family into the Richard B. Russell Building, I didn’t give him just one pack of Juicy Fruit. With a face full of smile, Herschell accepted four.