When Rayonier cranked up in 1954 on the bluff of the Altamaha River, there were no cell phones or social media. Still, first-time passersby found a way to register their complaints. I ought to know. My mother was the pulp mill’s original switchboard operator. Few days went by that someone didn’t call to ask, “What is that awful stink?”
In her genteel way, Margie—ever the diplomat—was the shock absorber for her employer. But hometown folks would argue: “What stink? It smells like bacon and eggs to me.” No doubt, Rayonier’s payroll over the decades has helped thousands of families prosper. And that doesn’t count the taxes paid, the ancillary jobs created and the philanthropy.
In the early 1950s, the street talk was that the mill was going up river to Lumber City. Instead, Wayne County leaders wooed Rayonier to here. Our community had three key necessities: plentiful supplies of water, wood and cheap labor. The rest is history.
That was then.
This is now. Companies and citizens are better informed. Today, the environment is a hot-button issue. Rayonier is more sensitive than ever to its critics. 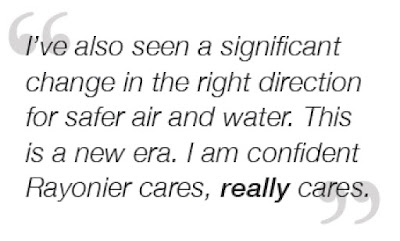 For decades the mill’s practices were accepted as “that’s just the way it is.” Stuff—polluting stuff—was dumped into the river. Employees drove “mill cars” to work, cars that were dusted by corrosive “snow” falling from the stacks. Mother’s was a rusty, ragtag Ford.
Again, you didn’t hear much grumbling. I certainly didn’t complain. As a summer college-kid employee, I was making $2.725 an hour in the finishing room, lime kiln or bleach plant. I’d never seen that much money—ever. Rayonier paychecks bought my first car. Fifty years later, my wife is still wearing the diamond paid for with mill money. Mother helped send her three children to college. Thanks to the mill, there wasn’t a dime of student-loan debt. I will always be grateful to Rayonier.
Now, welcome to 2019.
Remember the “this is not your father’s Oldsmobile” campaign? Well, Rayonier’s attitude and management practices are not your 1954 pulp mill. Clay Bethea, mill manager, explains Rayonier can do nothing about the past. The company’s focus is on today and the tomorrows.
A couple of days before Thanksgiving, I walked through the same gate as I did in 1967, 1968 and 1969. As I listened to Clay and two of his associates, it was clear: They want the mill to be a good business, a good corporate citizen and a good steward of the environment. Our community needs for those three objectives to be achieved.
For 37 years, I’ve been a downstream neighbor of Rayonier. Years ago, we had foam and smelly water sweep through our swamp. I’ve been to the outflow pipe and witnessed dark liquid spill into the river. I’ve seen the aerial photos of the inky-looking ribbon running down the middle of the stream.
And, yes, I’ve listened to the rumors—true and false—launched at Rayonier. I’ve also seen a significant change in the right direction for safer air and water. This is a new era. I am confident Rayonier cares, really cares.
Clay and his team’s passion is an extension of Rayonier’s more than $72 million—and growing—investment in improvements. He concedes there is still more progress to be made. Clay believes being environmentally friendly is also good for business.
Furthermore, future generations deserve us to be responsible protectors of our natural resources. For too many years, America’s streams were glorified industrial drainage ditches.
As the saying goes, “Rome wasn’t built in a day.” And Rayonier’s environmental enhancements won’t be accomplished overnight. You and I will be watching, closely, very closely. In the meantime, I have faith in what has been fulfilled and especially what lies ahead.
I applaud Rayonier’s new-era efforts.
Oh, and what would I like for supper Friday night?
An Altamaha delicacy—white perch—caught downstream from the mill.