One moment the cast of Hair was singing. And then it happened. The young men and women started shucking their clothes. I mean everything, without missing a pair of tighty-whiteys, bras or a single note of the Cowsills’ signature song.
That was just the beginning. Buck naked, the singers joined hands and started walking off the stage toward the audience. With unbelievable poise and agility, they stepped from arm to arm on the theater’s seats, front to back, singing, “Gimme a head of hair … long beautiful hair.”
When they reached our row, no one had to tell me to duck.
That was 1970.
As a college senior, I was in a group representing the University of Georgia’s Interfraternity Council at a national convention. We went to Chicago to learn, and I learned—quickly—I had never seen anything like that in rural Southeast Georgia or Athens. 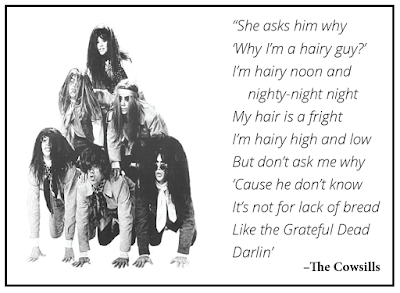 The theatrical production of Hair was a smash hit. And hair, the strands that grow on our bodies, evokes many other memories.
■ Circa 1954, I was tall enough to graduate from sitting on the board to the leather seat of Ralph Grantham’s barber’s chair on Cherry Street. And the first time he lathered the back of my neck and shaved it, I thought I was almost grown.
■ Circa 1964, a teammate showed up to football spring practice sporting long locks of hair. Coach Clint Madray scowled and growled, “Roy, what’s that on your head?” “It’s a Beatle haircut, Coach.” Big Clint couldn’t care less about music’s “British Invasion” and fired back, “If you don’t get a haircut, I’ll ‘beatle’ your @#%!”
■ Circa 1968, when I was a college sophomore, my girlfriend helped me save money. She cut my hair, hoping I’d spend the two dollars on lasagna on our date at Tony’s in downtown Athens.
■ January 1971, that hair-clipping girlfriend was my wife, and I was in boot camp at Fort Campbell, Kentucky. She visited me once, before I shipped out for advanced Army training at Fort Sill, Oklahoma. When she arrived, I was marching in a squad of shaved heads. Over dinner that night, she joked, “If I had known your head was that ugly, I wouldn’t have married you.”
■ April 2020, I need a haircut. The coronavirus has made Jerry’s chair off-limits. That means my 50-year bride is going to have to break out her scissors, again, unless I want to grow a ponytail. And that reminds me of Larry Walker’s story about Allan Stalvey’s 1970s ponytail.
The South Carolina lobbyist went to Washington to convince Strom Thurmond that his client needed the curmudgeonly—but immensely powerful—U.S. senator’s support. As Allan pleaded his case, Sen. Thurmond kept his eyes fixated on his visitor. Allan thought Sen. Thurmond was really listening.
And when Allan finished his carefully rehearsed pitch, the ancient senator, in a high-pitched voice, said, “Your hair is a little long, ain’t it, boy?”
Allan, stroking his ponytail, said, “Yes, senator, but the ladies like it.”
In response, Sen. Thurmond stroked the sparse hairs on the back of his wrinkled head and squeaked, “Been thinking about growing me one.”