If you’re looking for a mountain in South Georgia, stop.
But wait a minute.
A Tattnall County “Hill” is rising from the sweet-onion country’s sandy soil to become a very notable “mountain.”
How’s that?
A “hill” can become a “mountain” if it’s named for the late Jack Hill. Sen. Hill’s death on April 6 was a thunderbolt to all who knew him. Tributes to the humble Reidsville grocer turned legendary state-budget guru are stacking mountain-high.
If you know anything about Gold Dome matters, you know Sen. Hill was one of the most-respected authorities on Georgia’s multibillion-dollar budget. Gov. Brian Kemp called his colleague a “gentle giant.” Jack proved—through servant leadership—that you don’t have to be 10 feet tall to be a giant.
Former Gov. Sonny Perdue, now U.S. secretary of agriculture, and Jack shared an apartment—as fellow senators—during General Assembly sessions. Lt. Gov. Geoff Duncan said of his Senate colleague that Jack Hill insisted on good stewardship of taxpayer dollars. In his praise, he said that Sen. Hill led with “kindness and clarity.” Likewise, House Speaker David Ralston lauded his friend’s legacy by calling Jack “one of the finest public servants I have known.” 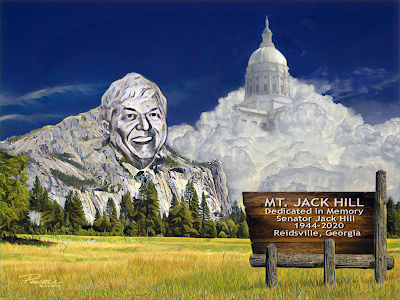 Jack and I go way back, too.
I knew that under his crown of white hair was a remarkable brain—packed with wisdom and common sense. Our roots are in Georgia’s coastal plain. The Altamaha River connects our home counties—Tattnall and Wayne. Stack this story to the ever-rising mountain of Jack Hill memories.
The year was 2010.
But long before that, Jack and I had talked about rural economic development. In the 1980s we had heard Allen Paulson, owner of the Gulfstream aircraft plant in Savannah, plea for an engineering curriculum to be added to Jack’s Statesboro alma mater, Georgia Southern University. The issue imploded in a politically charged spat.
In Athens the University of Georgia was rumbling with the desire to bring back engineering, which had been omitted during the Great Depression. The hope languished until Willis Potts, a Georgia Tech graduate and retired industrial engineer, was chairman of the University System of Georgia’s Board of Regents in 2010. After a year-old study, Willis recommended, “Georgia needs more engineers, and to do that we should expand engineering education beyond Georgia Tech.”
And then my fellow regent asked me to chair the Academic Affairs Committee. His instructions: “Get it done.” Debate erupted immediately. My friend, Gov. Perdue, who had appointed me to the Board of Regents, was vehemently opposed. We were in the midst of the Great Recession, and he argued that the state can’t afford it. Some regents agreed.
And then there were those regents who believed we couldn’t afford not to answer the need for more engineers. We had scores of bright young Georgians going to Florida, Auburn, Tennessee and Clemson because there wasn’t room for them at Georgia Tech. Our thought was: “Keep them at home for engineering education.”
Some naysayers tried to link the blowup to a Georgia vs. Georgia Tech football-rivalry fuss, as in “Clean Old Fashioned Hate.” That wasn’t so. I viewed the issue as what was best for 10 million Georgians.
We had a split-down-the-middle brouhaha. Remembering Allen Paulson’s appeal, I called Sen. Jack Hill and suggested, “How about tying UGA’s engineering request with the same ask for Georgia Southern University? Both or neither.” I could hear Jack’s 200-watt smile over the phone. With his leadership and budget acumen, he quietly went to work.
When voting day arrived, a fog of tension settled over the board room. As committee chair—standing at the podium—I could either vote to make a tie or vote to break a tie. Moving through the roll-call votes, I kept a mental tally. The count: 8 yes and 8 no. I got to break the tie.
The Georgia Institute of Technology, a global brand of engineering, continues to be one of America’s premier engineering universities. And the engineering programs at Georgia Southern and UGA have been on a rocket ride of success. Score a team victory. There’s enough credit to share with many, but I put Willis at the top. The Yellow Jacket engineer had the vision and the guts to launch the initiative.
Right next to Willis, I place Sen. Jack Hill, whose skilled statesmanship helped make the engineering-education expansion possible. Stack my memorial tribute on the imaginary—but most deserving—Mt. Jack Hill.