We must watch what’s going on in Brantley County

When you hear proposed-landfill noise coming from Brantley County, your first reaction might be: “We don’t have a dog in that fight.”
The fact is that we do.
But first, I don’t have any idea of who promised what.  However, a fleet of lawyers are squaring off over the neighboring controversy.  Disagreement among lawyers is how our courts work.  Sometimes, judges decide the winner.  Most times, juries do.  And then if you don’t like the verdict and have the money, you can argue your case all the way to the Supreme Court.
So, what’s our “dog” in this legal debate?
Our “dog” is no four-legged mutt. It’s a river, near the boundary between Wayne and Brantley counties.  The mirror-like Satilla River snakes 260 miles through Southeast Georgia on its way to lick the salt in St. Andrew Sound. 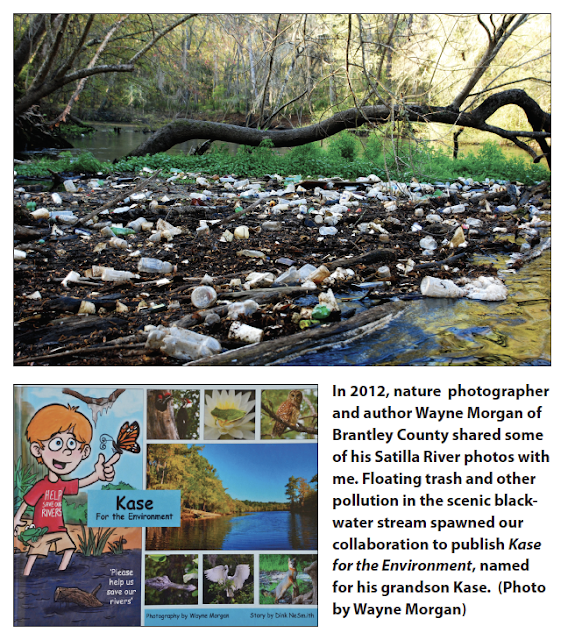 If you’ve never paddled beneath the canopy of trees over this dazzling stream, you have missed one of our state’s scenic adventures. The sugar-white sands glisten and suggest: “Take off your shoes and feel the magic between your bare toes.”  Ancient cypress trees have stood watch over this black-water gem for centuries.
If you care anything about nature, you can easily be smitten by the Satilla River.  My friend Wayne Morgan has taken more photographs of the river and its wildlife than anyone I know.  His first book, Satilla Solitude, is filled with eye-popping images.  It’s a visual treasure on thousands of coffee tables.
Almost a dozen years ago, Wayne showed me a handful of not-so-beautiful Satilla photographs.  The hairs on the back of my neck stood up as I shuttered, “How could anyone do that?”  Old tires, toilets and tons of trash were clogging spots along the Satilla.
“I want to do a book and help save the Satilla,” he said.
And I said, “Send me 150 pictures, and I’ll write it.”
Wayne’s first grandchild is named Kase.  On his introductory trip to the Satilla, then-3-year-old Kase—seeing the waterlogged trash—was shocked to tears.  Wayne titled the book Kase for the Environment.  A third edition is now being sold.
Meeting Wayne and visiting his oasis—Zirkle on the Little Satilla River—were important preludes to an environmental fight that has consumed almost five years. In January 2016, Wayne County got a crash course in toxic coal ash and what harm it could do to our natural resources and our health.
The community was enraged that Republic Services Inc., owner of Broadhurst Environmental Landfill, was planning to haul in as much as 10,000 tons of toxic coal ash per day. Wayne County could have become the largest coal-ash dump in America.
Because Broadhurst sits atop the Floridan Aquifer and because it is situated in porous terrain—not far from the Little Satilla River, which empties into the big Satilla—we had to stand up and say, “No way!”  For months, it was a slugfest. Both sides lawyered up.
And then in a regional leadership change, Republic sent Drew Isenhour to town.  He listened and offered to work with the community. Corporate attitudes shifted and tension eased.
Drew knows many of us think the landfill’s location was a poor ecological decision by the Environmental Protection Division (EPD).  The wetlands of Broadhurst are too fragile to risk leaking poison into our water source and draining pollution to the Atlantic coast, via nearby streams:  the Penholloway Creek, the Little Satilla River, the Satilla River and the Altamaha River.
However, the Broadhurst landfill is here to stay.  That’s why it is imperative that we work with Republic to make sure every precaution is taken to protect our environment and our health.
Now there’s this across-the-river legal brouhaha.  Will soggy Coastal Georgia get another landfill?  The courts may eventually say, “Yes,” but the court of public opinion—on both sides of the Satilla—is already shouting, “No!”
Wayne County, we should pay attention to this fight.