Feathered reminders that love is antidote to ugliness

She made gift buying easy. All you had to do was to give her something with a red bird on it. Put a bow on napkins, a handkerchief, a coffee mug, a figurine or a framed picture and she’d smile.
Mother loved cardinals.
And when I see a male cardinal—in all his red glory—I smile.
The other day, I did more than smile. I pulled out my phone to take a photo. I had left my driver’s-side window down, and a red bird was parading on the dash.
On the other side of the truck, my friend said, “I’ll open this door.”
“Wait!” I said.
Stetson Bennett started snapping pictures, too.
Before we let Mr. Cardinal out, he put on a show.
Sometimes at breakfast, a red bird taps on the kitchen window. I imagine Mother’s spirit is saying, “Good morning.”
According to government estimates, as many as 60 million Americans are birdwatchers. I’m not in that official count, but I do enjoy noticing them. Living on a farm, I get to see hawks, hummingbirds, robins, wrens, bluebirds and more.
That reminds me. I need to mount those bluebird boxes gathering dust on the workbench. And when I go to the mule barn, sparrows seem to follow me, hoping I’ll spill a little sweet feed.
Other favorite winged visitors are purple martins. We have two martin condos on tall poles. A sentinel usually sits on the roof, while his buddies perform aerial antics. I love to see martins migrate in. I’m sad to see them move on. 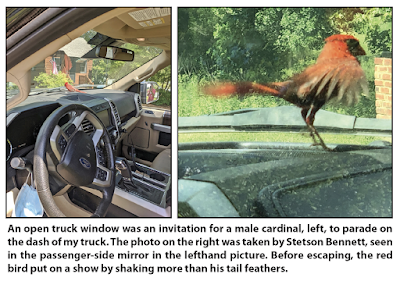 Right up there with purple martins are noisy killdeers. “Killdees” are skilled flyers, too, but their on-the-ground skits are a hoot. Ground-nesting killdeers don’t want you close to their eggs or little ones. With a broken-wing act, they lure you away. Kids are fascinated. This big kid likes it, too. And if I spot a nest, I mow around it.
How many times have you lifted a child so they could peek into a bird nest? And you whisper, “Shhhhhh … look, but don’t touch.” What’s not to love about that?
These days, doves and quail are pairing up. I don’t see many quail. But in the late afternoon, I can hear the bobwhite whistles back and forth. Doves don’t hide. They’ll let you get close before they wing off from their barbed-wire perches.
Wiley turkeys do hide. I don’t care how many turkeys I’ve ever seen, I look forward to spotting the next one. I feel as though I’ve won a prize if I see a flock scratching and pecking around the edge of the woods.
And then there’s Mother Nature’s alarm clock. I’m guessing it’s a mockingbird. No later than 6 a.m., the backyard chatter erupts. The best thing to do is get up. But I don’t fuss. Mockingbirds make me smile, too, especially when I see one chasing a bully crow.
Right now, there’s entertainment with pairs of mockingbirds doing what I guess is their courting dance on the lawn. The feathered choreography is a reminder that love is a beautiful antidote for all the ugliness swirling in the world.
Down at the pond, wood ducks and occasional mallards stop by. But I can count on a great blue heron—as it flaps away—to squawk a suppertime greeting.
Just before sunset, a V-formation of Canada geese swish over, honking as if to remind me, “You’d better hurry and feed the catfish, or you’ll be walking home in the dark.”
Well, maybe there’s one more to add to America’s 60 million birdwatchers.