Winston Churchill had advice for worrywarts

If you are prone to be a worrywart, 2020 is your kind of year. Consider COVID-19, the economy, our nation’s hell-bent-to-implode-over-polarization mindset, civil unrest, the endless Middle East conflict and the ever-nagging China question. That’s enough to keep you up at night if you are prone to worry.


I am not a worrywart, but I have grave concerns about how we are paving the future for our grandchildren and their children. Worry—as they say—is like a rocking chair. It can keep you busy, but it won’t get you anywhere.


When I was born, I came with two speeds: wide-open and off. That has been a blessing and a curse. As a kid, I liked the challenge of loading a wheelbarrow with as much as possible and then seeing whether I could push it. Not much has changed over the years, except the “wheelbarrow” has been replaced by a hefty to-do list. 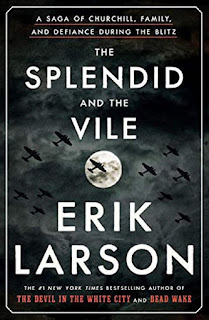 But then there are times that I flip the switch to off. I can be a lazy guy. And that’s what happened last weekend. Rain was predicted, so I settled under a tin roof with a good book. Erik Larson’s The SPLENDID and the VILE was just what I needed to be reminded that America and the world have a history of survival.


The subtitle of Larson’s World War II account is “A saga of Churchill, family, and defiance during the blitz.” The “blitz” being Hitler’s determination to bomb Great Britain into obliteration, especially London. By Larson’s account, between 1940 and 1941, almost 29,000 Londoners were killed. Another 28,556 were seriously injured. The United Kingdom’s total bomb deaths were 44,652, plus an injury count of 52,370.


I’ve read enough World War II books and material to fill a dozen seats on a double-decker London bus, but Larson takes the prize for detail. I suspect his research staff would have filled one of those iconic England buses.  I needed a lazy weekend to wade through fact after fact in The SPLENDID and the VILE.


Winston Churchill deserves much of the credit for saving the free world from the Nazi regime. Britain’s eccentric prime minister had a complex personality, but he wasn’t afraid to shake his fist at Germany’s bloodthirsty “Satan’s representative on earth” führer, Adolf Hitler.


Good for us that Hitler underestimated Churchill. The jowly prime minister looked like a bulldog, and he was. With a cigar clenched in his teeth and a strong drink in his hand, he growled, “Never give in. … Never yield to the apparently overwhelming might of the enemy.” And his country didn’t.


There’s nothing funny about war’s death and destruction, but I was amused by Larson’s report of Churchill’s going to Washington to lobby Franklin D. Roosevelt for America’s support. Perhaps our president didn’t know the prime minister had a proclivity for parading—unclothed in the privacy of his bedroom—while barking directives to his staff.


When FDR wheeled into Churchill’s White House suite, there was his guest “stark naked, drink in one hand, a cigar in the other.” As if this were nothing unusual, Churchill quipped, “You see, Mr. President, I have nothing to hide.”


As I chuckled, the predicted precipitation arrived. Rain’s pitter-patter on the tin roof drummed me to sleep. And when I awoke, I finished the book, all 503 pages. Erik Larson’s story of Winston Churchill is just what I needed in this worrisome era.

As 2020 “bombs” rain upon us, we must not lose our resiliency in the fight for survival. Above

all—for our grandchildren and their children—we must do as Churchill urged, “Never give in.”