Legend of Alex Hopkins lives on

If you saw or heard him coming and didn’t know better, you’d probably go the other way. Loud. Gruff. Unshaven. Sockless feet stuffed into a pair of never-been-polished slip-on Docksiders. A hairy belly button poking out in the gap between a smudged white T-shirt and his low-riding jeans. Both front pockets bulged. One concealed a pair of brass knuckles. The other a loaded snub-nosed .38.

I didn’t because I knew better. Beneath that burly veneer was a likable fellow who enjoyed his roughneck persona. He worked that colorful image, really worked it. Legend was that his daddy raised Alex that way so he could run the family’s timber and rental-house empire. If that’s the truth, Alex’s daddy overachieved his goal.

I remember my last visit with the Grangerville timber baron before he died in 1987. Sitting at my desk, I could hear Alex—down the hall and through two closed doors—at the front counter, asking for me. 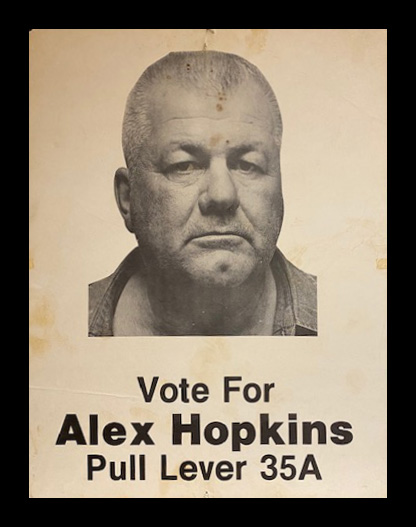 He had something to tell me, and I knew how he’d do it. Alex invaded your personal space so closely that you didn’t have to guess what he ate last. That morning, his breath smelled like smoked sausage.

“Heeeeey,” he grunted, in a voice that sounded like a log truck straining to get out of a bog hole, “I’m running for county commissioner. How ’bout that? Huh?” And then he bumped me with his belly.

Yep, he was standing that close, smoked-sausage close.

“Got a house in every district,” he laughed. “Ain’t decided which one to run in, but I’m running.”

“What’s going to be your campaign platform?”

“What will you do if you’re elected?”

“I’m gonna get some things straightened out.”

“They’re gonna tell the truth, or there’ll be a fistfight every first Tuesday.”

Decades have fogged my memory of the results, but it seems as though Alex came within fewer than 50 votes of winning. Wayne County history missed a humdinger of a chapter, recording what Alex really would have done on those first-Tuesday meetings.

In the corner of my office, there’s a campaign poster. Staring at me is a 1980s wannabe politician. He’s wearing an open-collar denim shirt. His salt-and-pepper hair—with a receding hairline—is cropped tight. A three-day stubble adorns his face, but you can still see the dime-sized dimple on his chin.

When visitors see the poster, they plead, “Tell me about Alex.”

There is a book of stories, but here’s the late Lewis Grizzard’s favorite.

IRS agents went to question Alex’s logging-equipment depreciation. Fox-wise Alex was two steps ahead. The equipment that he had been using was  temporarily disassembled and scattered under a shade tree. “See,” he said, “I told you that stuff is wore out.”

With that settled, he invited his visitors for lunch. Alex put ham, bread and mayonnaise on the table. With a knife, one probably used to castrate wild hogs, he whittled off slices of meat. With his hand, he dipped into the jar and slathered mayo on the bread. After adding ham, he plopped sandwiches in front of the auditors.

And then he asked them to bow their heads.

“Lord,” Alex prayed, “I thank you for this food. And, Lord, you have blessed my family with thousands of acres. You know our swamp is filled with hungry gators and such. Please, Lord, don’t let any harm come to these fellers ....”

When Alex opened his eyes, the agents were boiling dust out of the woods and Atlanta-bound.

Yep, Alex’s CPA certified that as the truth.

A fistfight is not necessary.