‘Precious memories how they linger’

As I stood on the pebble-laced hill, Mack, Kenworth and Peterbilt big rigs roared one way to Newton and the other way to Colquitt. Fanning gnats under Southwest Georgia’s heat lamp, I felt a chill, as BB-sized sweat beads cascaded down my spine. I wanted to cry, but tears would not build back my great-grandparents’ house.

For a century, the dog-trot structure had stood, along Highway 97, on pillars of stacked field stones. Its amber heart-pine walls—inside and out—had never been touched by a dab of paint. All that was left of my boyhood oasis was dirt, the same dirt that had once felt magical to my bare feet so many summers ago. On the day of my visit, the soil was moist, courtesy of a monstrous aluminum creature called a center-pivot irrigation system.

I knew change was coming to Baker County. The demand for uninsulated, rusty, tin-roofed houses would fall short, way short, of the value of rich soil to grow peanuts and cotton. That’s why I had sent word that I wanted to dismantle Pa and Ma McNeal’s house. I was going to reuse the vintage lumber to build something to remind me of my mother’s heritage. 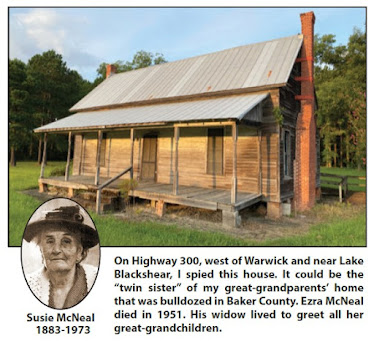 Somehow, the message was lost or forgotten. A Caterpillar bulldozer destroyed those hopes before Pa could have harnessed his mule and hitched a plow. A few splashes of diesel fuel and a match sent black smoke swirling into the sky.

Pa moved his family there in 1910. By the time I was old enough to swing on the backyard pump’s handle, Ezra McNeal was resting in Pilgrims Home Primitive Baptist Church’s graveyard. I would have loved to tag along with the pint-sized farmer, known for his pine-knot toughness. The legend is that Pa would say, “If he’s bigger than you, pick up a level and knock hell outta him.”

Standing 4-foot-11 and stoop-shouldered from years of hoeing and picking cotton, Ma had a personality that was the polar opposite of Pa’s. ­Her heart was featherbed soft. People who knew Miz Susie declared she was a Heavenly saint on earth. Mean-spirited words did not cross her lips—lips that had never been painted with a dime’s worth of lipstick.

I can see her now. Around her weathered neck is a shawl crocheted by an aunt as a wedding gift seven decades ago. The mother of five is resting in a petite oak rocker in front of her bedroom’s fireplace. Her stubby, calloused toes are waving with the hiss of orange embers, a reminder of the morning fire that broke the Baker County darkness.

On my last trip to Ma’s house, I rescued that rocker. In the waning years of my mother’s life, she greeted sunrise rocking and praying in that heirloom chair. Today when I sit in it, I can smell the blackberry cobblers baking in Ma’s woodstove. And I smile, thinking about the saint who put cold biscuits in the corner pie safe, waiting for great-grandchildren to poke their thumbs into the fluffy centers and fill the holes with cane syrup.

I pay regular homage to Pilgrims Home Primitive Baptist Church, where the pioneers of my mother’s family are buried. Mother told me how the church got its name. She explained, “As my people were bouncing in a wagon from Alabama to Georgia, mean-spirited kids ran along the sides and taunted, ‘Here come the gypsies! Here come the gypsies!’”

Frightened, my grandmother and her siblings cried. Ma cooed, “No, my dear children. We aren’t gypsies. We are pilgrims. We are on our way to a new home.”

“… Precious memories how they linger

How they ever flood my soul … ”

You can’t destroy those, you monstrous aluminum creature.