Even above the commotion caused by COVID-19, you could hear the EPA’s hooves in the rules-change stampede. The Environmental Protection Agency—despite the public’s concern and comments—was determined to gallop toward weaker regulations for toxic coal ash.

We shouldn’t be surprised.

Kissing the coal industry and its customers on the mouth was predestined.

Andrew Wheeler, a former coal lobbyist, assured us of that when he was appointed the EPA’s new director. If ever there was a proverbial fox put in the henhouse, this would be a classic example.

On April 24, 2018, I was in Washington to testify about proposed coal-ash rules. Someone asked, “Where’re the coal folks?” I replied, “They’ve already been here. Look at these proposed rules. This is their wish list. We are just going through the motions so that the EPA can say it had a public hearing.”

But if we are suckered by Director Wheeler’s spin, you’d believe Americans are safer, courtesy of the agency charged to protect us and our environment.

Translate that to read: “The lobbyists did their homework—spending whatever it took—to get what they wanted.” 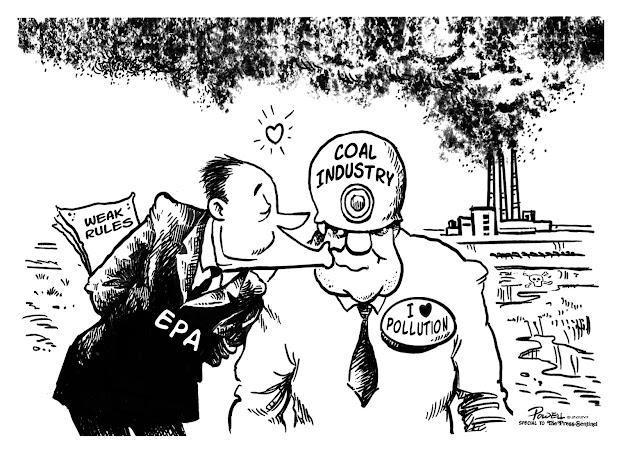 When I was in Washington, I met attorney Lisa Evans of Earthjustice. We had been swapping emails since 2016, when the toxic coal-ash controversy flared up in Wayne County. Lisa, an expert on the subject for the global nonprofit, has countered Wheeler’s statements.

In a July article in The Hill, she said, “EPA is disingenuous. EPA is clearly fulfilling the demands of industry. This is coal lobbyist rule. This is Andrew Wheeler’s rule, and we wouldn’t expect anything different.  This rule allows tens of millions of tons of additional toxic waste to be placed in impoundments we know are leaking.”

And here’s what I saw.

Frightened residents were filling jugs with safe drinking water that was hauled in from elsewhere, away from the suspected leaking toxic coal-ash ponds of Georgia Power’s Plant Scherer. A group of residents are suing the utility on the belief that their wells are contaminated.

In the meantime, Monroe County officials have approved $16.3 million in revenue bonds to install more than 70 miles of water lines around Lake Juliette of Fried Green Tomatoes fame. Clean air and safe water are keystones to quality of life.

That is why our newspaper fought against a plan that would have dumped as much as 10,000 tons of toxic coal ash per day into the local landfill. Georgia Power said it “had no plans” to dump its coal ash in Wayne County. That was good, but we were clear that we didn’t want anyone’s toxic trash.

Just as the EPA brushes off concern over coal ash, Georgia Power’s attitude seems to be the same. Consider the cocky tone of these two 2016 emails that I got from Chris Cummiskey, then Georgia Power’s executive vice president:

Cummiskey is one of the utility’s rising stars. Perhaps he’s introduced the arrogant flipside of the longstanding warm-and-fuzzy slogan: “A Citizen Wherever We Serve.”

Amid the COVID-19 crisis, we could easily lose focus on how the lobbyists are influencing the EPA to put America at more health and environmental risks.

The past is a good predictor of the future.

There’s proof that some companies will spend whatever it takes to get what they want, including weaker pollution laws. According to the Energy and Policy Institute, the Southern Company—Georgia Power’s parent—has spent more than $135 million over the past decade to pedal political influence. That’s more than any utility in America, and it does not count what Georgia Power spends on a busload of lobbyists.

We need EPA looking out for our best interest, just as we need Georgia Power doing the same.

But as these two emails and recent EPA actions show, we don’t need anyone in Atlanta or Washington peeing on our legs and trying to convince us it’s raining.