Franklin and Hart counties share the small town of Canon. And if you blink, you’ll miss the low-slung concrete-block building that squats beside Highway 17.

What happened in that beer joint—years ago—makes me laugh every time I drive between Lavonia and Royston.

Besides being the editor and publisher of The Herald-Journalin Greensboro, Carey Williams is a walking book of stories. You’d need a jumbo pack of Crayolas to be as colorful as Carey. He’s how I learned about a famous visitor to Canon’s former roadside watering hole.

Among Carey’s eclectic circle of friends was one of my boyhood idols, Mickey Mantle of the New York Yankees. There was a time I could rattle off the entire roster. In those days baseball fans either loved or hated the Yankees.

I lovedrooting for the Yankees.

In the summer of 1960—on a road trip with my Aunt Lillie—she made one of my dreams come true. There I was, albeit in the cheap seats, watching Mickey, Roger, Yogi, Whitey, Elston, Tony, Clete, Bobby and the rest of my pinstriped heroes trot onto Yankee Stadium’s diamond.

When we returned to Jesup, I thumbtacked a Yankees souvenir pennant to my bedroom wall. Sixty years later, grandson William NeSmith, 11, displays that faded felt triangle. I was the same age when I visited New York.

After retiring, Mickey spent time in Carey’s backyard—well, Lake Oconee. That’s how they met, probably playing poker. Carey became Mickey’s go-to person if the switch-hitting slugger wanted to know something about anything in Northeast Georgia.

One day, Mickey said, “I hear there’s a Ty Cobb Museum around here.” Carey said, “It’s in Royston, his hometown.” Mickey grabbed a half-empty bottle of whiskey and said, “Let’s go.” Besides belting the baseball, The Mick belted back more than his share of stiff drinks.

Carey said Mickey polished off the bottle on the way to Franklin County. And when they got to the museum, Mickey stayed andstayed. He wanted to see and read everything about the “Georgia Peach.” Heading to Greensboro, Mickey said, “Time out. I’m out of whiskey. I’ll need more for the trip home.”

Carey thought a minute and said, “In these parts, there’s only one place that I know of to get what you want. It’s The Flats in Canon.”

When Carey pulled off Highway 17, there was a cluster of cars around The Flats. Stepping inside, they were greeted by a haze of blue smoke and a blaring country song on the jukebox. Mickey beelined for the bar. The proprietor couldn’t believe the Major League Hall of Famer was at his bar and Mickey was thirsty. 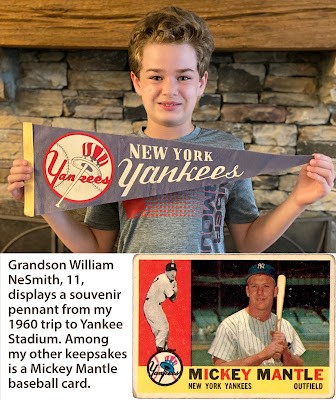 Carey says the barkeep—over the loud music, laughter and clicking billiards balls—tried to get everyone’s attention. He wanted his patrons to know who had just walked in the door. After shouting, louder and louder, the bartender gave up.

And then he had an idea.

Reaching beneath the counter, the barkeeper pulled out a pistol and aimed at the ceiling.

Pool cues dropped. To a hushed crowd, the shooter announced, “Everybody, I just wanted y’all to know that we have a special guest among us. Please welcome the great Mickey Mantle.”

With his signature boyish grin and a tip of his cap, Mickey said, “@#&*! I’ve been introduced all over the world, but this is the loudest introduction that I’ve ever gotten.”

Next time you’re passing through Canon, think about the late Yankees legend and Mickey’s one-and-only visit to The Flats.

And if you laugh, you can thank his colorful poker-playing buddy Carey.