If you know anything about South Georgia football, you know there’s pigskin in Bennett DNA. As a first-grader, I started hearing about the Jesup High quarterback who led the Yellow Jackets to a 1954 state championship. I’ve watched grainy black-and-white highlights of Buddy Bennett’s bootlegs, hiding the pigskin on his hip. He was a field general whose slick ball handling left defenders choking on dust and gnats. When Fran Tarkenton was scrambling for the Georgia Bulldogs, Buddy was scrambling for the South Carolina Gamecocks.

As the Bulldogs struggled against Arkansas last Saturday, I wasn’t surprised that Coach Kirby Smart turned to Stetson Bennett IV, Buddy’s grandson. I repeat there’s pigskin in Bennett DNA. And that reminds me of a line often used by UGA’s immortal defensive genius Erk Russell: “It’s not the size of the dog in the fight. It’s the size of fight in the dog.”

The Razorbacks—with bloody snouts—got a taste of that when Stetson, the undersized quarterback in the Bulldog fleet of signal callers, trotted onto the field. Looking back, Coach Smart called Georgia’s win “sloppy.” But he said that Stetson “gave us the juice we needed” and added that “he’s a great competitor.”

Anyone watching the game could see “the juice” Stetson injected into the lackluster offense. The “Great Competitor” came off the bench to throw two touchdown passes and dive into the pylon to score on a two-point conversion.

The Dogs went from trailing at halftime to score 29 unanswered points in the third quarter and win 37-10. Since his little-boy days of sitting in Sanford Stadium, Stetson Bennett IV has dreamed of leading Georgia to victory.

When “Stet” finished a stellar career at Pierce County High, big colleges—including Georgia—wanted bigger quarterbacks. But that didn’t deter him. He walked on to wear red and black. And when Georgia prepped to face Oklahoma in the 2018 Rose Bowl, Stet—on the scout team—played the role of Heisman Trophy quarterback Baker Mayfield. 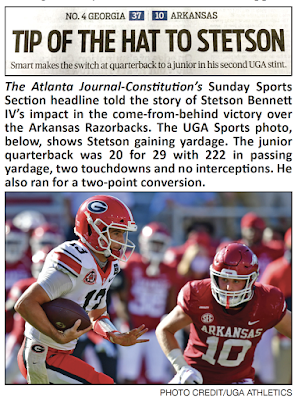 I was in Pasadena. If I never witness another football game, I’ve seen two glorious ones—the 1980 Buck-to-Lindsay Jacksonville magic and the silencing of mouthy Mayfield and his Sooners, 54-48. Coaches and teammates praised Stet for his getting them ready, but he wanted to compete in the game.

With Jake Fromm and Justin Fields ahead of him on the depth chart, he went to Mississippi’s Jones Community College to take snaps for a year. And then Jake went to the NFL and Justin transferred to Ohio State.

Stet came back, on scholarship. Still “bigger” quarterbacks were ahead of him, but that didn’t stop him from training as if he were the destined starter.  What he might lack in height, Stet more than compensates in heart—heart to be a Bulldog, heart to be a winner.

Something else you need to know about Bennetts. Besides pigskin in their DNA, there are also buckets of sweat. Stet’s granddaddy was a taskmaster on andoff the gridiron. One summer, Buddy bought a short-wood log truck so that his sons could tone their muscles, loading the pulpwood by hand.

Last summer, I visited with my longtime friend Stetson III. He hadn’t bought a pulpwood truck, but he assured me that Stetson IV was getting into game-day shape. He said that if Number 13 was called, Stet would be ready.

Saturday night, Buddy would have been proud. But not as proud as the Bulldog Nation was when Stet proved: “It’s not the size of the dogin the fight. It’s the size of fight in the dog.”