Confession:  I have never wanted a cat.

So, how did we wind up with three different cats?

The quick answer is that kitties 1, 2 and 3 found us. And since we are animal lovers, these cats found a royal welcome, with certain restrictions.

Daughter Emily earned a drama degree from the University of Georgia. The truth is that she was born with a Ph.D. on the subject. With the least prompting, Miss Em—as a little girl with plaited pigtails—could roll marble-sized tears down her cherub cheeks.

And that’s what she did every time we had the I-want-a-kitty conversation. Her mother explained, “Darling, you are very allergic to cats. Your doctor doesn’t think it’s a good idea.” And the crocodile tears rolled.

One day, she and her older brother, Alan, were picking up pinecones in the front yard. They heard a cry in the curbside mailbox. Inside was a flea-bitten kitten.

With tears of joy, Emily raced inside. “Look, Mamma! God heard my prayers. He sent me a kitty in the mail.”

Pam said, “Yes, that’s a miracle. But we need to take the kitty to the veterinarian. If Dr. John Wolfe says he’s OK, then we’ll give the kitten a try.”

Doc Wolfe declared the solid-black kitten was a keeper. And since he arrived in the mailbox, we dubbed our new pet Zip Code. When Emily went off to college, Mr. Zip was still with us, 14 years in all.

When Zip was about 10, a gray kitten appeared. And since stray Cat Number 2 arrived on the day the Braves had won another National League pennant, he became Tomahawk Chop, aka TC.

TC and Zip became garage suitemates. With the help of my dad, we built two three-level cat condos. The first floor had a litter box. The mezzanine featured food and water. The carpeted penthouse was for lounging and snoozing. For the cold months, each was equipped with pig-parlor heating pads.

During the day, the pair were yard cats. At dusk, they answered the dinner bell and jumped into the safety of their bachelor pads.

Zip died of old age. TC wasn’t so lucky. He took one too many trips across the street, in search of mice in the vacant lot.

A pitiful cry pulled Pam into the storage barn’s tool room. And there he was—behind a shovel—hungry and meowing his heart out. After hours of searching for his mamma, I was sent to the pet store for a tiny bottle and replacement milk.

We guessed the gray-and-white kitten was about 3 weeks old. For two days, we looked for Mamma. She was better hiding than we were finding. Then two more kittens meowed in the hayride wagon. In a good-news flash, Mamma Cat bolted by. The little cats weren’t going to starve. 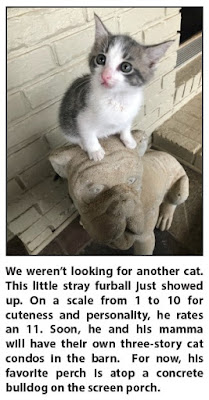 We wanted Mamma to be nourished, too. I put out food and water for a week. Then I placed food inside one of our plywood-box armadillo traps. Within 20 minutes, the doors dropped. And then I got luckier. I spied movement under a workbench.

Lying face down on a mechanic’s rolling creeper, I eased toward the dark corner. One by one, I plucked the kitties. The furry family was reunited in two large pet crates that I had connected. When the kittens are old enough, all four cats will be spayed and neutered. Mamma and a son will become mousers in the barn. The other kittens will go up for adoption.

In the meantime, their sibling is basking in the comfort of a big personalized box. Grandchildren are clamoring for naming rights. Two old cat condos are being updated.

And that’s how dog people got to be cat people, again.