As my fingers click these words on my computer’s screen, I have no

idea who will reside in the White House in 2021. Voting booths are still open,

and who knows when the final vote count will be final.

This I do know.  If you like messy politics, you must be overjoyed with the he’s-a-liar and she’s-a-liar mudslinging 2020 campaigns.  Pick an issue, any issue, and there are venomous accusations aplenty.

Sen. Kamala Harris is endorsing one, and President Donald Trump is touting another.  The smokes are as different as the politicians, but both are dangerous to our health.

Let’s start with smoke coming from marijuana joints. Sen. Harris has made it clear. She wants “weed” decriminalized. That’s right.  Marijuana , in her opinion, should be legalized.

I am not surprised.  Our courts and jails are stuffed with marijuana offenders.  Fifty-five years ago, brothers were kicked out of our fraternity because someone “thought” the trio was smoking something called marijuana.  By the time I earned my 1970 college degree, there were no suspicions.  The “grass” more andmore students were smoking wasn’t the variety growing on the campus lawns.

Fast-forward a half-century.  As one 40-something parent told me, “It’s everywhere.” Marijuana, that is.  And I guess that’s one of the senator’s arguing points.  After all, she’s been labeled the most liberal member of the United States Senate.

In any debate, the fact that “everybody”is doing it has never been a selling point for me.  What this sounds and looks like is a puff of smoke to win votes.

But to me, it looks like waving a white flag in the war on drugs.

Now, what smoke is our president blowing?

Donald Trump’s love affair with the coal industry is no secret.  He is determined to save coal, despite the energy producers’ exodus from that fuel source. There are cleaner, more affordable ways to crank turbines—e.g., natural gas. 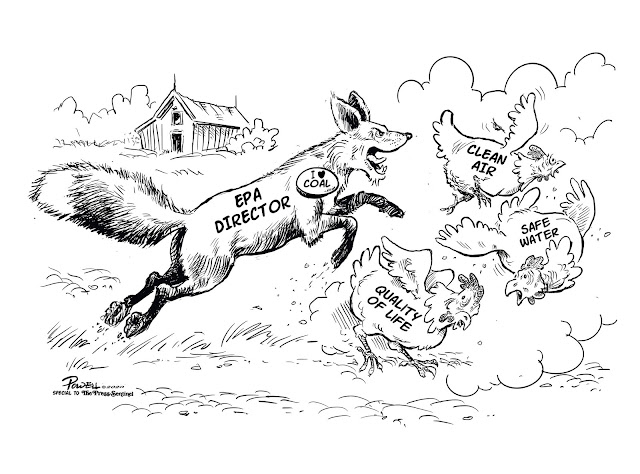 The president’s intentions were underscored when he installed a former coal-industry lobbyist to run the Environmental Protection Agency (EPA).  If there was ever a proverbial fox in the environment’s henhouse, it’d be Andrew Wheeler. Clean air and water protections are being tossed faster than you can quit reading these words.

I understand the president’s desire to save jobs.  Paychecks make it possible for most people to solve their own problems, without having to rely on the government.  But where’s the president’s concern for bigger payrolls?

Technology is likely to replace big-rig truckers on the road.  E-commerce is wiping out retailers, large and small. The list of at-risk jobs is growing, but what is our president doing about those paychecks?

Coal is a hazard that doesn’t disappear once it escapes from smokestacks. We know that coal ash is toxic to our health and our environment.  Improper handling and storage of coal ash have caused numerous deaths and massive destruction to our natural resources.  Once it’s dumped in the wrong places, the poison is passed on to generation after generation.

President Trump and his EPA point guard seem to care less about those concerns. It’s simple.  Without clean air and water, there is noquality of life.

And that ain’t just blowing smoke.

But Sen. Harris has another idea.

If everyone gets high enough smoking marijuana, we won’t care.