Looks can be deceiving.  If you’re meeting Hinson Mosley for the first time—and he’s dressed in sweat-stained denim—you might make a mistake by thinking you are looking at a fellow who hasn’t strayed too far from the plow hitched behind his mule. And if you aren’t careful, you might think that again when he speaks in his signature aw-shucks monotone.

But stop right there, or you’ll be going down the wrong dirt road.

Hinson is proud that his roots are deep in rural Georgia’s soil. He’s felt the prick of sharp cotton hulls as he’s plucked the fluffy white bolls from stalk after stalk on rows seeming to reach the horizon.  He’s no stranger to back-breaking labor or grease under his fingernails. Put a wrench in his hands, and Hinson knows where and how to turn it.

For the people who know—really know—Hinson Mosley, they saw something more than a master pulp-mill instrument technician or dawn-to-dusk farmer/mechanic. His slow-speaking tone didn’t fool them at all. They saw and heard more, much more. Those are the people who encouraged him to do more than fix industrial or agricultural equipment. They wanted him to go to Atlanta and take his commonsense wrench to what needed fixing in state government. That’s how Hinson came to represent his District 171 constituents in Georgia’s House of Representatives. 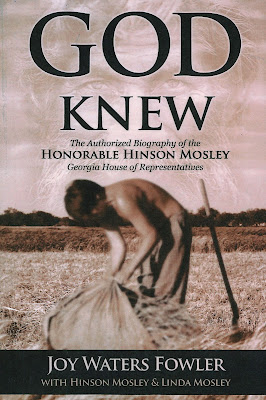 I had known Hinson for years, but I knew his in-laws better. During my college summers, I worked for his future father-in-law, Don Lawson. Don was general manager of Rayonier. In the late 1980s I was director of the Adult 1 Sunday School Department, and Don was my Sunday school teacher at First Baptist Church. We served as fellow deacons.

In 1974 Hinson married Linda Lawson. Linda had taught with my wife, Pam, at Jesup’s Orange Street Elementary School. For 50-plus years, Pam has worn the diamond that I bought with my $2.725-per-hour pulp-mill paychecks.

When First Baptist Church on Brunswick Street opened its door, the Lawsons and NeSmiths had our customary pews. I can still hear the way Linda’s mother, Irene, livened up the sanctuary when she sat down at the organ. Improvising as she went up and down the keyboard, Irene could knock the dust off musty old hymns.

When Hinson ran for public office, I got to know him better.

I remember our first conversation about his candidacy. His opponent was one of my boyhood Sunday school teachers. Hubert Howard was also my personal and corporate attorney. Hinson said, “I know you’ve got to support Hubert, but I have one request. If you can’t help me, please don’t hurt me.”  We shook hands, and the rest is history. Hinson went to Atlanta, and Hubert kept on being my attorney, trusted adviser and friend.

In time, Hinson and I got to know each other as friends, too. When he calls, I know that he has been thinking about an idea. In his unrushed, pensive way, he trusts me to be a sounding board, and I’m always ready to listen.

I’ve always believed there’s a book in every life. For years, Hinson has talked about putting his story between the covers of a book. Somewhere along the way, Hinson quit talking and teamed with his wife and Joy Waters Fowler to make his dream come true. He drilled into the Great Depression and the day—Oct. 21, 1932—that he was born. From that start, Hinson layered story after story into a thick and very readable stack of memories.

As you turn the pages, you will discover why God Knew is the perfect title. Just days into this world, pneumonia almost robbed the author of the next 88 years. Hinson is convinced the Lord had other plans. God knew—He really knew—where the Honorable Hinson Mosley was going in life.