Clint Madray almost choked on his chaw of BEECH-NUT. Shifting the

tobacco from one cheek to the other, the burly UGA Wally Butts disciple

growled, “Roy, what’s that on your head?”

Our football coach hadn’t watched the Ed Sullivan Show and the British Invasion by the Beatles—Paul, John, George and Ringo. But the sophomore had. Over the winter, Roy had grown a shaggy mop of hair before reporting to spring practice.

Coach Madray wasn’t impressed. “If you don’t get that mess off your head,” he barked, “I’ll ‘Beatle’ your behind with this!” And the whack of the wooden paddle in Clint’s meaty palm bounced off the concrete-block walls at Jesup High School.

If you pay any attention to athletics, you’d know our beloved coach would be out of step in 2020. He’s gone to gridiron heaven, and times have changed. Today’s long-haired players must have embraced the biblical story of Samson, who believed his phenomenal strength was rooted in his flowing head of hair. But when Delilah clipped his locks, well, go to the book of Judges, Chapters 13-16.

Scanning high school, college and professional ranks, Samson has his share of modern-day, hair-believing disciples. When the New Orleans Saints’ Alex Anzalone trots onto the field, more hair is out of the menacing linebacker’s helmet than inside it. There must be millions of women who would love to have thatmuch blond hair. But I’m not poking fun at the bone-crunching former Florida Gator. 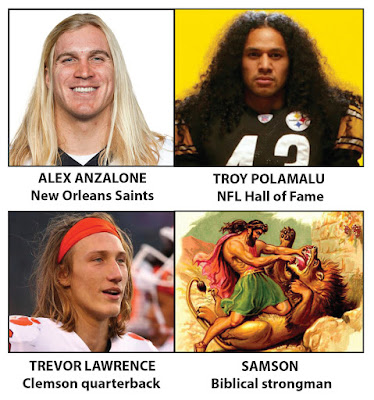 You’ve probably seen the Head & Shoulders commercial with Patrick Mahomes and Troy Polamalu. Patrick—the Kansas City Chiefs quarterback with a $500 million-dollar contract—teases Polamalu about his hair. Troy—a former Pittsburgh Steeler—would make Samson smile. And if the NFL Hall of Fame safety wants to grow his hair to his ankles, that’s OK with me, too.

And long hair is just fine with the Tiger-pawed fans of Clemson University. Coach Dabo Sweeney’s Tigers are in the hunt for another national championship. Quarterback Trevor Lawrence, a super star from Cartersville, has shoulder-length blond hair flapping outside his orange helmet. With his towering height, swift long legs, cannon-like right arm and field-general savvy, Trevor is projected to be the top pick in the upcoming NFL draft. Nothing girlish about his long hair either, but hold on.

That brings me to Vanderbilt University’s placekicker, Sarah Fuller. She made college football history, kicking an extra point in the Commodores’ loss to Tennessee on December 12. My friend, Michael, was watching the game with his son.

“Maddox,” Michael said, “you just witnessed history. Sarah is the first female to score in Power 5-football history. You need to remember this.”

The 8-year-old quadruple-sport athlete shook his dark-chocolate Beatle mop and said, “Uh-uh, Daddy. What about that girl who’s Clemson’s quarterback?”