Santa’s secret in the funeral home

Sandy and I took turns. One year, my sister would stay up late. The next year, I had

the let’s-see-if-we-can-catch-Santa duty. That’s the way it went until my parents got their own

bedroom, and I got to move into the closed-in back porch where they had been sleeping.

In my first bedroom, the inside wall had a picture window about seven feet from the floor. The fixed pane of glass allowed sunlight into the next room, where Sandy and our little sister, Sheila, slept. Perched on my top bunk, I had the perfect spying post. With wide eyes and a hushed voice, Sandy explained, “Now we don’t have to take turns anymore. You’ve got the perfect place to see everything that happens on Christmas Eve.”

In our compact funeral-home apartment, our parents slept on a pull-out sofa bed on the enclosed back porch. Other than the kitchen and the communal commercial/residential bathroom, there was no place to put the Christmas tree except in my two sisters’ bedroom. From my top bunk I had a front-row seat at a major event: the arrival of Santa Claus. Sandy and I kept the catch-Saint-Nick conspiracy from Sheila. 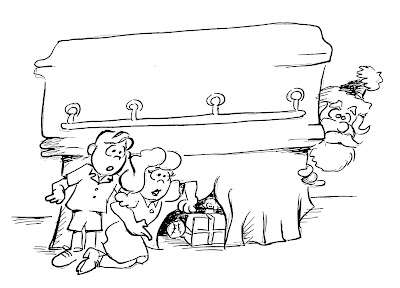 With such a great observation point, my only challenges were to lie still, stay awake and report. During my first two turns, I did the first task too well. I lay too still. I was snoring when Santa came and went. Both times, I got a scolding from my big sister.

By Thanksgiving of the next year, she had just about forgiven me. In early December, we started plotting again. Time was running out. We were getting too old to be left wondering if Santa had helpers.

One Saturday morning our luck changed. We had just finished putting up the Christmas tree when Mother sent us for the vacuum to clean up the silver icicles from the floor. Space was at a premium in those pre-remodeling days. We had to look for places to store stuff such as vacuum cleaners.

In NeSmith Funeral Home, there were 20 neat, out-of-the-way nooks for hiding things. In the showroom, caskets were displayed on stands with drapery-like curtains around the bottoms. Behind those maroon-colored skirts were our extra-storage spots. Someone would ask, “Where is the box of family pictures?” Mother would reply, “Look under the caskets.”

That’s what Sandy and I were doing on that morning. On our hands and knees, we were crawling from casket to casket looking for the vacuum cleaner. First, we looked under the high-end coppers and bronzes. We came up empty-handed in the steel section, too. Then we worked our way toward the wood merchandise. Pulling back the curtain on the rack of a light-blue doeskin cloth-covered wooden casket, Sandy let out a faint squeal. Growing up in the funeral home, you learned to be good at expressive whispering because “the family” might be in the next room.

“Why is she so excited over finding an Electrolux?” I wondered.

Goosebumps swept over my skinny body. Sandy hadn’t found just a floor sweeper. No, she had found the motherlode of answers to a childhood mystery. Beneath that budget-priced coffin were items from the list that we had mailed to the North Pole.

Hearing Mother’s footsteps, we snatched out the vacuum and pulled the drapes back into place. And then we did the smart thing—conjured up a double case of amnesia.

On Christmas morning, we asked, “How did Santa Claus get our bicycles down the chimney?”