Four choices to escape political ugliness on the tube

“I find television very educating. Every time somebody turns on the set, I go into the

other room and read a book.” –Groucho Marx

In a normal week, I’ll read a book. In a great week, I will read two. Lately, I’ve had a string of greatreading weeks. The tsunami of negative she’s-lying-he’s-lying ads have turned me and the TV off.

If they were aiming to influence my vote, the ugly messages did more harm than good. I am voting to re-elect senators David Perdue and Kelly Loeffler. I believe America would be better served without the White House and both aisles of Congress dominated by one party. If you disagree, I’ll respect your opinion withouthating you.

In memory of Groucho, here are four of my favorites for “the other room” reading:

Where I Come From, Stories from the Deep Southby Rick Bragg. Rick gets my vote as today’s best Southern wordsmith. Mississippi’s William Faulkner was a legend, and he won a Pulitzer Prize. He was brilliant, but I struggle with his deep, dark style. Rick’s won a Pulitzer, too, and I feel my heels clicking from one of his pages to the next.

His downhome Alabama storytelling is pure magic. For most folks, this array of columns is perfect for reading in spurts. Read a few. Smile. Come back later to read a few more. But for me—like a bowl of warm banana pudding—I couldn’t put down this classic Rick collection until I had scraped the last lick from the bowl.

Redbirds, Memories from the South by Rick Bragg. Somehow, this book had slipped by me in 1998. Rick, when we were gnawing on barbecue ribs last year, why didn’t you tell me about Redbirds? I stumbled upon a paperback copy in November. Joyously, I sacrificed sleep to read every word. 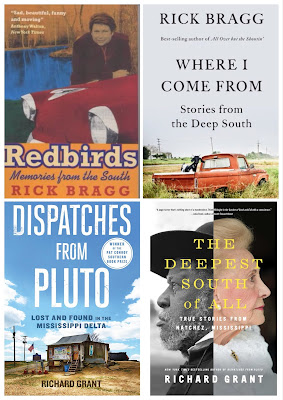 Rick bared his soul. In his gifted way, Rick can make you tear up one moment and chuckle out loud the next. I’m talking about laughing the way you did in the third grade, when lunchroom milk spurted out your nose. Redbirdsis so good, well, I’m reading it again.

Richard Grant is my gold-star literary discovery in 2020. He’s “not from around here,” so I soaked up his fresh view of our Southern customs—good and bad. Richard opened my eyes to many things that I had taken for granted. And he made me laugh andlaugh some more.

Picture a funny-talking stranger walking into a Delta juke joint and looking like a marshmallow perched on a barstool in the middle of a coal pile. And making friends. You will be enlightened and entertained with Richard’s adventures in the most Southern of places—the Delta.

The Deepest South of All, True Stories from Natchez, Mississippi by Richard Grant. I jumped from Pluto straight into this deep dive into one of America’s iconic antebellum communities. Remember the chatter John Berendt caused with Midnight in the Garden of Good and Evil?When it comes to history and quirky characters, Savannah has nothing—I repeat, nothing—on Natchez.

Richard took me to school on hoop skirts, slavery and today’s racial views—black and white—and the complicated dynamics of a community’s blending its past with the future. Again, the United Kingdom transplant tickled my funny bone. After reading about Natchez’s quirky characters, I decided that I’m not so weird after all.

I recommend these reading delights to escape the televised mudslinging.

And I suspect you’ll learn something, too.