Signature stories—told and retold—define a family, providing connectivity from one

generation to the next. On December 8, 2012, I listened—yet another time—to what happened

25,916 days ago. For Marjorie Vines NeSmith, the infamous day was yesterday.

As we turned into the circle of my mother’s alma mater, Georgia Southwestern in Americus, I watched her chin quiver. The corners of her azure eyes moistened. And then she began to narrate, as if she had a 71-year-old news reel stored beneath her 88-year-old silver hair.

December 6, 1941, had been a joyous day on the Americus campus. Co-eds had been busy swapping gowns, so every young lady would have a “new” dress to wear to the Saturday dance. “We jitterbugged the night away,” she said. “We listened to a new voice of the Tommy Dorsey Orchestra—Frank Sinatra.” As the records spun, couples twirled across the gymnasium’s varnished hardwood. Dabbing her eyes, she said, “We had such a good time.”

As we drove near Sanford Hall, I knew to slow down. I could tell she was searching for the spot. Seconds passed, and she said, “It’s not there, but it was right here.” The stone bench was gone, but not the memory of Sunday afternoon, December 7, 1941. 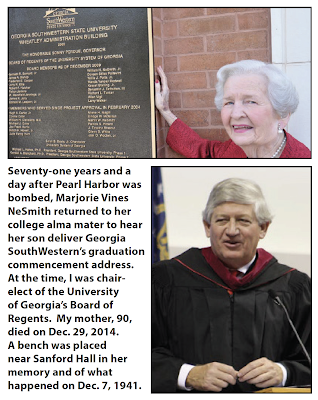 The valedictorian of Warwick High School, a cute, 17-year-old, curly-headed blonde was sitting on a bench in front of her dormitory. Along with other girls, she was reliving the night before, while studying for the next day’s exams. That’s when they heard the raucousness rolling their way. The horn of a 1939 Ford was honk, honk, honking. The car was sausage-stuffed with boys. Some were clinging to the running boards. All were yelling: “The Japanese have bombed Pearl Harbor!”

“We didn’t know what to think,” she said. “We didn’t know where Pearl Harbor was, but we knew our lives would be changed forever.” As the sun set that night, students gathered on the steps of Wheatley Hall, the administration building, for a vespers service. “We held hands, we prayed,” she said. “And we sang—a cappella—‘God Bless America.’ It was beautiful.”

The Greatest Generation will never forget what happened on December 7, 1941—just as September 11, 2001, jarred the souls of every American generation since Pearl Harbor Day.

When I stopped my vehicle in front of Wheatley Hall, Mother dabbed her eyes, again. Waiting for us was the university’s president, Dr. Kendall Blanchard. He had invited me to give the graduation commencement address. He suspected I wouldn’t say no. He knew Georgia Southwestern is embedded in my family’s soul, through this signature story.

Mother remembers boys rushing from campus to enlist on December 8, 1941. She remembers being caught up in patriotism, too. She had dreamed of becoming a teacher. A scholarship was helping make that dream come true, but if her friends were willing to fight for freedom, she must do her part in the war effort, too. She put down her studies and went to work.

In 1946, she married her war hero. Three children followed. College was put on hold—forever. That’s why December 8, 2012, was important. I wanted Mother—my teacher of important life lessons—to revisit her alma mater and tell me, again, what happened so long ago.

On the next visit—thanks to her nine great-grandchildren—a new bench will be waiting on the spot, near Sanford Hall at Georgia Southwestern. They, too, will want their children to know where this old signature family story began on December 7, 1941.