We’ve been working together since 1865

Thanksgiving 2020 is gone, but I’m still in a thankful spirit.  If you are reading these words, I am grateful.  If your ad—large or small—appears in this or other editions, I am grateful.  Your loyalty—your support—has kept our presses rolling since 1865.  We didn’t get to be Wayne County’s oldest continually operated business without you.

I can’t imagine any other career.  Elliott Brack—with his pants-on-fire brand of journalism—ignited my passion.  EEB, as I call him, has long since retired, but I always expect and appreciate his critiques. EEB and Dr. Lanier Harrell accepted me as a greenhorn in 1971.  We were partners for a short time, but their influence will never fade. 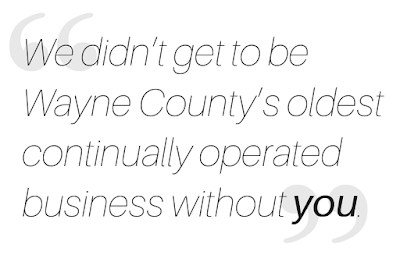 Newspapering is a calling.  You must work long hours and occasionally endure abuse, mostly verbal. Physical threats do pop up, too, but you can’t bow to bullies.  A core belief is that strong newspapers help to build strong communities.

Scrolling back over the past 50 years, I remember some examples of how your newspaper’s strength and stamina helped build a stronger Wayne County:

The Press-Sentinel is committed to being the tip of Wayne County’s spear in fights for what is best.  We believe a strong newspaper helps to build a strong community.  And to be strong, we need you—our readers and advertisers.  Teamwork really works.

Besides, a selfish and bloated ego is boneheaded.  I was reminded of that premise early in my career.

“Congressman,” EEB asked, “what can we do for you?”

With a friendly smirk, Billy said, “Elliott, please support my opponent. Your endorsements are the kiss of death.”