Sometimes you have to learn the hard way

end of the mule kicks. C.J. was a prosperous merchant’s son in Troup County. J.W. was a

cotton farmer’s son in Wilkes County. And by the time they’d meet, their wallets would be tens

of millions of dollars apart. Still, their shared passion—agriculture—brought them together to

“Cason J. Callaway was the only $50 millionman I ever met,” Dr. J.W. Fanning once told me. “And he surely knew how to put his money to work, making the world a better place.” The cotton mill magnate and future founder of Callaway Gardens invited Fanning, a county extension agent, to spearhead the 100 Georgia Better Farms.

The economic drought of the Depression lingered, and Georgia’s farmers were struggling in the 1940s. Callaway wanted to plow his ideas and dollars into the state’s farms, hoping to make a difference. He had been an innovator in terracing, fertilization and trying new crops.

Callaway’s vision and success were like a magnet, attracting 700 other businesses to contribute $1,000 each to help underwrite the effort. Fanning taught businesslike efficiencies, along with the Callaway way. Before long, almost all of the participating farms were turning profits. 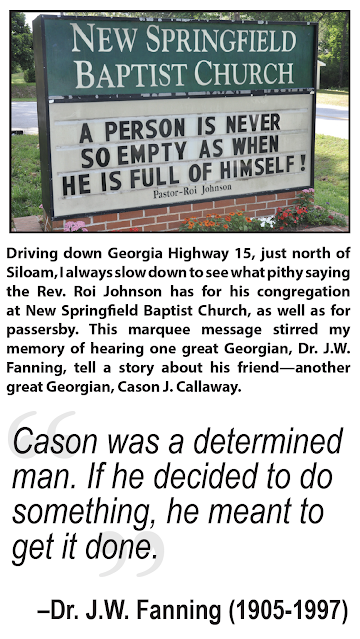 When the 100 Farms initiative was done, that wasn’t the end of Callaway and Fanning’s association. They remained friends and mutual admirers until Callaway’s death in 1961. Dr. Fanning liked reminiscing about the famous Georgian from Blue Springs in Harris County. My mentor especially enjoyed retelling the story—as originally told by Callaway—of the famous gardens’ founder and his ambition to corral Mountain Creek.

“Cason was a determined man,”said Dr. Fanning. “If he decided to do something, he meant to get it done.” And Callaway was determined to build a huge lake on his property near Pine Mountain. To do so, he’d have to construct a massive dam on Mountain Creek. Others had tried that before and failed.

“One fella even told Callaway, ‘Mr. Cason, God doesn’t want Mountain Creek dammed up,’” Dr. Fanning said. That didn’t deter Callaway, either. He hired an expert to do a 100-year flood study so he could build his dam to those sure-fire specifications. He wanted a lake, and he’d show the doubters. Engineers, with blueprints in hand, ordered bulldozers to start pushing dirt. Callaway stood back and smiled, watching the progress.

Before long, the waters of Mountain Creek started backing up. Callaway’s dream of a massive lake was coming true. Take that, naysayers. And at that point in the story, Dr. Fanning always stopped. His eyes twinkled as he chuckled. Then he’d continue, “One night a 200-year flood came.” The angry waters of Mountain Creek gnawed on the manmade earthen obstacle. Nothing could hold back the millions of gallons.

At sunrise, Callaway heard a knock on his door. A worker said, “Mr. Cason, you need to come with me.” Standing on a hilltop, Callaway assessed the destruction. His dam had imploded, cascading a furious wall of water over the cultivated fields in its path.

Dr. Fanning said his friend then felt a tap on his shoulder. When Callaway turned around, he saw God standing there. And God said, “Cason, I just had to do it.”

“Because, Cason. You got too big for your britches.”