Jesup had its own version of the late-night television star, Tim Cockfield.

My eighth-grade math teacher didn’t have a lucrative broadcast contract, but

Tim was never short of jokes or wisecracks.  He loved to laugh, and he loved to

make others laugh even more.

I can see him now, sitting on the front edge of his wooden desk at Jesup Junior High on East Plum Street.  Mr. Cockfield—that’s what we called him in 1961-62—was swinging his penny loafers.

Looking back, he was baiting us.

Sure enough, someone asked, “Mr. Cockfield, did you know you had on one yellow sock and one green sock?”

I can hear him now: “Heh, heh, heh.  Yep, these are my favorites.  I’ve got another pair just like them at home.”

That was classic Tim Cockfield.

In those days, Johnny Carson was new to The Tonight Show, taking over from Jack Parr.  Because it aired past my bedtime, I rarely saw the program.  But when I did, my math teacher reminded me of the NBC celebrity, both in looks and one-joke-after-another persona.

In 2020 we said goodbye to Tim’s wife of 62 years, Merle.  And for years, when I’d mention her husband’s name, she’d coo, “Isn’t he the most handsome fellow you’ve ever seen?”

Merle had a bigger-than-life personality, too.  When I was a teenager, she reminded me of another TV star, Eva Gábor (Zsa Zsa’s sister) of Green Acres fame.  With her exquisite dress and expressive language, she could have been.  And when Merle teamed with fellow teacher Peachy Aspinwall, the globetrotting pair could have put on a TV show of their own.

Tim Cockfield arrived in Jesup in 1951, three years after I was born. Ten years later, I was sitting in his class.  I am not sure who was the most frustrated—him trying to teach me algebra or me trying to learn.  I remember staring at the cover of that bottle-green math book and thinking the equations inside it looked like Greek. 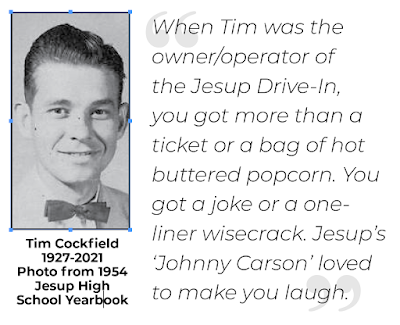 My seventh-grade teacher could have warned Tim.  Mrs. Nanelle Bacon said I almost flunked math because I couldn’t “do decimals,” until she told me to put a dollar mark in front of them.  And then I never missed another problem.

Maybe slow learners—like me—caused Tim to eventually exit the classroom.  But he had two other careers that made him a household name in Wayne County.  Tim was good, very good, with a camera.  And Merle was his stagehand.  She’d coax wiggling kids to sit still and “look this way” for Tim to snap photos.

Cockfield Studio was in our Walnut Street building, next door to The Press-Sentinel.  If we met each other on the sidewalk, I knew to pause.  Tim had new material.  I always walked away laughing.

His final foray into business was reopening the Jesup Drive-In, believed to be Georgia’s oldest drive-in movie theater. He also once owned the Baxley Drive-In, too. Today that’s where Captain Joe’s Restaurant sits by U.S. 341 in Appling County.

When Tim was the owner/operator of the Jesup Drive-In, you got more than a ticket or a bag of hot buttered popcorn.  You got a joke or a one-liner wisecrack.  Jesup’s “Johnny Carson” loved to make you laugh.

His response never disappointed me.