The nature bug bit her early. In fact, Dorinda Dallmeyer was so young that she can’t remember not being curious about all things outdoors. Growing up in middle Georgia—not far from Ocmulgee Mounds, the Native American burial ground—the retired UGA instructor thinks her interest in America’s first naturalist, William Bartram, was somewhat preordained. In the late 1700s, Bartram’s exploration came within a mile of her Macon childhood home.

I met Dorinda through University of Georgia Press, the book-publishing arm of our mutual alma mater. The catalyst of our connection was one word:  Altamaha. Dorinda, with my friend and fellow author Janisse Ray, had just released their book, Altamaha, A River and Its Keeper. Their essays and more than 230 of James Holland’s color photographs had me hooked, 10 pages in. Putting down his crab traps, James picked up a camera and became the first Altamaha riverkeeper.

Years before I met the scholar/editor/author, the Altamaha “bug” had bitten me. We are kindred spirits. Dorinda and her husband, David, who is also retired UGA faculty, live in the middle of a Madison County hardwood forest, not far from our Oglethorpe County farm.  And there—with the sights and sounds of nature all around her—Dorinda researched and orchestrated a Public Broadcasting Service (PBS) documentary to complement her 2010 book on her favorite subject: William Bartram.

The Philadelphia-born botanist, ornithologist, natural historian, explorer, artist and author has been described as “the first naturalist who penetrated the dense tropical forests of Florida.” His observations and attention to detail are mind-boggling, centuries before smartphones with cameras and Google maps. His notes would overfill the bed of a Silverado pickup. And his drawings are exquisite.

Much of William Bartram’s explorations pattern our company’s newspaper footprint: Western North Carolina, Southeast Georgia—including ventures up the Altamaha River—along with extended treks to Florida’s Amelia Island, the St. Johns River and Palatka. Mention his name in certain parts of these three states, and William Bartram fans will raise their hands.

If you want a deep dive into the man and his mission, I suggest you read Bartram’s Living Legacy, The Travels and the Nature of the South, published by Mercer University Press and edited by Dorinda. Landscapes by Athens artist Philip Juras add a special aura. If the nature bug has bitten you, too, you’ll want to keep this 568-page resource within reach. I find myself going back to it, again and again.

And if the nature bug intrigues your family—especially your children and grandchildren—Dorinda has something for you all: Cultivating the Wild. Primary funding for the documentary documentary­—narrated by Bailey White—was from the Bobolink Foundation and the Wormsloe Foundation.

I have watched it three times, so far. Much of the hour-long documentary was filmed in Georgia, along with a trip to a mammoth cypress tree in Miller Lake in the Altamaha River swamp, downriver from where our grandchildren love to paddle. 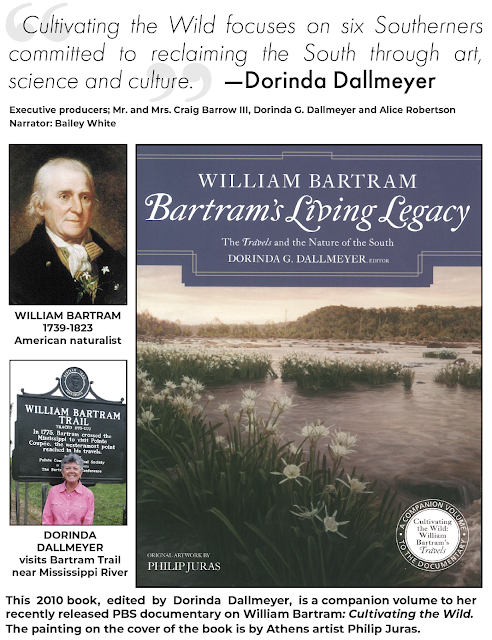 Dorinda says, “Cultivating the Wild focuses on six Southerners committed to reclaiming the South through art, science and culture. Their inspiration is William Bartram, 18th-century naturalist and America’s first environmentalist.” And now you can understand why—through Bartram—Dorinda and I are kindred spirits. God gave us these irreplaceable natural resources, and He expects us to be responsible stewards.

“Because of the pandemic, a theatrical run was impossible,” says Dorinda.  “Instead, with the cooperation of South Carolina Educational Television (SCETV), Cultivating the Wild made its national debut in mid-November. It’s been shown from Alaska to New York to San Francisco to Miami and many places in between.”

She laughs, “William Bartram is visiting places that he never got to see firsthand.” For the next three years, the PBS documentary will be available 24/7 on SCETV: https://www.scetv.org/watch/national-programming/cultivating-wild.

When our 8-year-old daughter—now the mother of four boys—was paddling with me in the backwaters of the Altamaha, Emily shook her pigtails, slapped her face and whined, “Dadddddddy, why did God even create gnats, mosquitoes, ticks and redbugs?”

I smiled and said, “Miss Em, that’s His reminder that we aren’t in Heaven yet.”

And, Dorinda, I believe William Bartram would have echoed, “Amen!”