Sheriff Andy Taylor’s Mayberry couldn’t have been more idyllic than the constricted bubble of my world, circa 1953.  I felt almost grown when my parents trusted me to walk the long block to a brick building, where Bamboo T-bones into Cedar Street.

A 5-year-old could do that back then, even if he couldn’t read the letters on the front of the elementary school: T.G. Ritch.  But thanks to my first-grade teacher, Mrs. Leslie Poppell, I was soon reading about Jack and Jill and more.

Recently, when I read about the school’s partial demolition in The Press-Sentinel, my mind walked back to my first-grade year.  Mrs. Poppell had a kind, grandmotherly aura.  I remember only her and our principal, Mrs. Lois Spence, whose paddle was legendary.  She and I laughed about that years later.

I remember eating fish on Fridays. I was told that was to respect Catholics.  I didn’t know what a Catholic was.  But as a Baptist kid, I liked dipping the fish sticks into ketchup.  And I especially liked Friday’s option of Phelps Dairy chocolate milk.

But when the second-grade bell rang, we were living on the west side of the railroad tracks.  My steps to Orange Street Elementary covered six blocks.  And as my school walks increased, so did my knowledge of the late Dr. Thomas Green Ritch.

I was born in the Ritch-Leaphart Hospital. Dr. Alvin Leaphart delivered me 26 months before his partner died in 1951.  Dr. Ritch’s daughter, Dr. Una R. Yeomans, was my pediatrician. She died, too, before I got to know her, but her husband, Dr. Woodrow Yeomans, was a friend of our family. 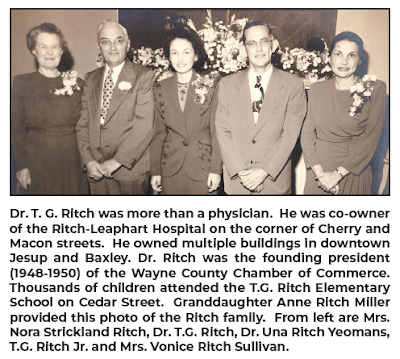 A World War I veteran from K’ville, Dr. Ritch had a legacy stretched far beyond medicine.  He was a civic pillar.  When I was president of the Wayne County Chamber of Commerce in 1980-1981, I enjoyed looking at the pictures of past presidents.  Dr. T.G. Ritch was the first in line, dating back to my birth year—1948.

I met T.G. Jr. at a Cherry Street store that carried the initial of his last name.  S&R was a mecca of men’s clothing for more than 60 years.  Vonice’s husband, Jimmy Sullivan, co-founded S&R.  After T.G. Jr. stepped away, Jimmy Sullivan remained a main-street icon for decades.

Vonice R. Sullivan was the queen of Cherry Street.  Sullivan’s, the Cherry Blossom Shop and the Tot Shop were retail dynamos, serving clients across Southeast Georgia.  I credit the Sullivans for giving me an advanced degree in customer service.  My parents declared that I would have paid Jimmy Sullivan so that I could work at S&R.

At Christmastime, I wrapped packages with Dr. T.G. Ritch’s granddaughter, Jan Sullivan.  When Jan moved back home with her husband, Gary Peel, her dad said, “Help Gary to get to know folks.”  It went further than that.  Our children, Alan, Emily and Eric, grew up with their children, Pam, Laura and Rick.  Dr. Ritch’s great-grandson, Rick Peel, is now a Cherry Street businessman.

I understand times and needs change.  In the name of progress, giant machines—with mechanized claws—pull old buildings to the ground.  If you drive to where Bamboo T-bones into Cedar, you won’t see what I saw in 1953.

I understand that, too.

But I would not understand this: Wayne County’s forgetting Dr. T. G. Ritch’s legacy. How about a historical marker?

My check is ready.

Will you join me?