‘Have you called your mama today?’

How far back can you remember?

Our three children are convinced that I can remember the day I was born.

That’s a stretch, but I tease them that I do recall the ride home from Ritch-Leaphart Hospital in downtown Jesup.

My dad, Big Dink, worked for Harrison Funeral Home. He was behind the wheel of a 1947 black Cadillac hearse that doubled as an ambulance. His window was down, and he was smoking a Winston to celebrate.

In the back, I was cradled in a lattice-like wire basket, milk-chocolate brown. William Henry NeSmith Jr.—soon to be known as Little Dink—was resting on a feather pillow covered with a starched white cotton pillowcase. Cooing to her only son was my mom, Marjorie. She told me about my 2-year-old sister, Sandy.

However, I don’t remember that day in December 1948.

But as we prepare for Mother’s Day 2021, here are a few snippets of an unforgettable highlights film that always rolls through my mind.

Margie was an eternal optimist 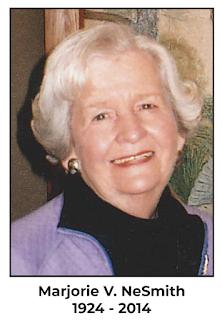 Behind every dark cloud, Mother searched for a silver lining. Her blue eyes sparkled as she read to me The Little Engine That Could. Until her eyes closed forever on Dec. 29, 2014, she thought that I could. She instilled in sisters Sandy and Sheila and me the encouraging words of Philippians 4:13: “I can do everything through Him who gives me strength” (NIV).

Her six grandchildren believed that Mother had a direct line to God. If they had a final exam or big challenge, they made sure Grandmother NeSmith was lifting a special prayer.

Mother was a guiding light in the First Baptist Church’s youth department. And on Feb. 9, 1964, she became a hero. The youth choir was to sing on the Sunday night that Ed Sullivan was hosting America’s TV debut of the Beatles. Teenagers were panicking. Mother shushed their fears. She said, “Sing your hearts out. And when Brother Jenkins bows to pray, quietly slip out. Go watch the Beatles.”

The choir was surprised, but not as much as the Rev. Floyd Jenkins, who opened his eyes and turned to thank an empty choir loft.

When she was in her late 80s, I took her to Waffle House. She couldn’t eat for looking around the restaurant. She said, “I don’t know any of these people.” Excusing myself from the booth, I walked outside and studied the car tags. Back inside, I said, “Mother, you aren’t supposed to know these people. All of the tags are from out of town.”

With that, she poured syrup on her waffle.

By her 90th birthday, Oct. 11, 2014, Mother was fading. She knew that, but she wasn’t afraid. With her blue eyes sparkling, she said, “I can’t lose. If the Lord lets me live, I will enjoy every day with all of you. And if the Lord calls me to Heaven, I will be with the love of my life, your dear father. I can’t lose.”

The last words she said and heard were “I love you.”

Alabama coaching legend Bear Bryant would ask his football players, “Have you called your mama today?” Followed by, “I sure wish I could call mine.”