All I wanted was a Coke and crackers

A Coca-Cola and a pack of Lance crackers. That’s all I wanted when I pulled into Manning Tire & Grocery in Gardi. But before pushing the glass door open, I paused to read the handbill: “Schnauzer puppies for sale.”

Once inside, I exchanged hellos with the Rev. Wayne Manning and his son, Rooster. Pointing to the poster, I asked, “Rooster, do you know those folks?” “Sure. Good people,” he said. “They live right up there, just off the [Brunswick] highway.”

I almost forgot why I went in the country store.

A Coke and crackers. Before leaving, I jotted down the name and number. In a few minutes, I was sitting in the grass with two hyper furballs, jumping and licking.

Handing me the health records, Kirk Brogdon said, “We only have two males left.” One was silvery-white. The other was charcoal-gray. Both were packed with personality. Without hesitation, I said, “I’ll take them both.” That was 2008.

If the pups could have talked, they could have been comedians. Everything they did made me laugh, so I named them for two of the funniest comedians in my memory—Amos and Andy. Someone questioned me for being “politically incorrect” in my choice of names. No way. The original Amos and Andy would have laughed at these puppies, too.

We fell in love with schnauzers 30 years ago. We’ve had two truckloads of dogs, but never one to live inside. Jet-black Jeb was the first schnauzer to steal our hearts. In my office is a picture of Jeb, riding in an inner tube behind the boat on Lake Hartwell. Daughter Emily said, “Jeb brings out the best in us.” And he did for 14 years. Our hearts sagged when the vet said, “It’s time.”

In 2012 we almost lost Andy. He must have eaten a poison mushroom or something similar. He languished in ICU for two weeks. Dr. David Barwick’s father, Wallace, asked whether he could lay his hands on Andy and pray. By the next day, Andy had that look: “When am I going home?” 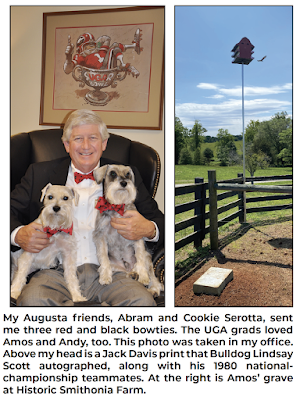 A few years later, Andy was the first patient in the emergency room at UGA’s new vet-hospital. But once again, he bounded back.

Amos was always the healthier one. In the past year, age took its toll. Amos became deaf. His back legs quivered. His hips couldn’t hold him up. Then he wouldn’t eat or drink. Amos knew: “It’s time.”

His last day was a Sunday. Amos snoozed in my lap, with his head across my arm. I scratched behind his ears and rubbed his back, doing whatever I could to make him comfortable. Amos died the way I would prefer. He went to sleep and didn’t wake up.

I buried Amos by the pasture’s blackboard fence. He would have wanted that. For most of his life, Amos raced out the back door, barking as if it was the first time that he had ever seen our big red mule. If mules can laugh, Maggie chuckled thousands of times at the charcoal-gray schnauzer.

A purple martin condominium is attached to a pole, high above Amos’ grave. As I was digging, the martins swirled overhead. I imagined the chattering birds were conducting a ceremonial “fly over,” much like the Navy’s Blue Angels.

All I wanted that day was a Coke and a pack of Lance crackers.

And I left Gardi with two funny furballs.

As I write this, the silvery-white one is curled at my feet.

I can’t imagine the past 13 years without Amos and Andy.