My brain slipped, and I stepped in ‘it’

As my fingers were flying over the keyboard, I stepped in “it.” And I didn’t realize my

goof until a reader reminded me that the elite Blue Angels were Navy and not Air Force pilots.

I knew that when I wrote last week about the purple martins swirling over the grave of our beloved dog Amos. The winged acrobats reminded me of the Air Force’s Blue Angels in one of their famous flyovers.

See how easily I stepped in “it.”

If I keep repeating that over and over, my brain’s memory wires will get untangled.

I apologize to all the Navy men and women for the error. My Uncle James NeSmith retired from the Navy, as did his grandson, James Jaehnig. Uncle Johnny NeSmith served in both the Navy and the Air Force.

And one of my favorite Navy pilots is Vietnam veteran Harry Yeomans. Harry and Jane moved to Jesup about the same time Pam and I did. The Yeomans and NeSmith children grew up together.

But the first time I saw Harry, I thought Sheriff Buford Pusser (Joe Don Baker) of Walking Tall had moved to Jesup, too. I almost asked him for an autograph.

One day I mentioned to Harry that I would like to take some aerial photographs for the newspaper. He had the perfect setup. Harry’s dad, Dr. Neal Yeomans, had an open-air PiperJ-3 Cub. It resembled a go-cart with wings and a propeller. To make it easier for me to get snapshots, Harry removed the canvas doors so that I could lean out.

When I started to climb into the plane, Harry said, “You get in the front.”

Harry got in the backseat to take the controls—with his long legs extending past my seat—and off we went. As the tiny plane roared down the strip, I hollered, “I wish this runway was a little longer!” And Harry yelled back, “Yeah, that is what I said every time I took off from those Navy aircraft carriers!” 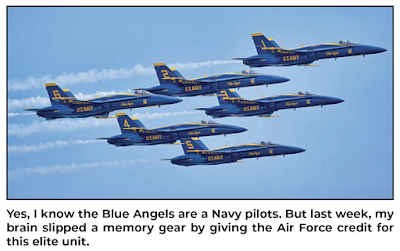 After I was flagged for my Blue Angels blunder, I remembered some more phenomenal Navy pilots. In 1986 a retired Air Force pilot, also of the Vietnam War, said, “You must take your children to see Top Gun.”

Tom Cruise and his buddies put on a big-screen show. But it was more than just incredible aerial maneuvers. The language was salty, and then the flyboys got too friendly with the ladies.

I hadn’t done my homework. This flick—in my opinion—wasn’t age-appropriate. When clothes started coming off, I stood up and said, “Alan, Emily and Eric, let’s go.” Our three were mortified, as their friends watched our exit. Decades later I still mention Top Gun, just to see their eyes roll and hear a chorus of “Daaaaaaad, I can’t believe you did that.”

Well, I can’t believe I bobbled the credit of the Navy-sponsored Blue Angels either.

And by correcting my mistake, maybe I didn’t track “it” all over the house.