Remember the Mennen Skin Bracer slap-in-the-face aftershave commercials? My favorite featured Joe Frazier, who gave himself a knock-down slap. From his bathroom’s floor, the heavyweight boxing champ said, “Thanks, I needed that.”

Occasionally, we all need a proverbial slap in the face as a wakeup call. I got mine in January 2016. Without warning, the slap was more like a left hook from Smokin’ Joe. I was stunned but pulled myself from the floor to fight.

Millions of tons of toxic coal ash were headed to the private landfill in Jesup. If I hadn’t read John Grisham’s Gray Mountain, I wouldn’t have known what coal ash was or its threat to our health and our environment.

With the recent barge crash on the jetties of Jacksonville’s Atlantic Beach, those residents are getting a quick education on what’s left from the burning of coal: coal combustion residuals (CCR). Over the past 66 months, the first thing that I learned was: Opinions vary on the dangers of CCR, or coal ash. 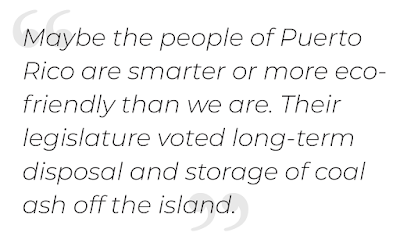 The second lesson was that money talks and big money screams. Big-money lobbyists for the coal industry and its customers screamed loud enough to convince the Environmental Protection Agency (EPA) that coal ash is not a hazardous waste. One electric-utility lobbyist told me that there’s more danger in a landfill’s household garbage than in his company’s coal ash. I don’t believe that, but the EPA did.

What is in coal ash?

So why did the EPA rule toxic coal ash to be nonhazardous? My best answer is the big-money screams. I am not a scientist, but I think there’s a simple litmus test that the EPA should conduct in Flint, Michigan. Ask those citizens, “What part of lead in your drinking water is not hazardous to your health?”

Maybe the people of Puerto Rico are smarter or more eco-friendly than we are. Their legislature voted long-term disposal and storage of coal ash off the island. That’s why the barge Bridgeport—loaded with Agremax, a coal-ash mixture—was headed to Jacksonville’s port when it ran aground and spilled a reported 9,314 tons of its load. The eventual destination was Waste Management Inc.’s Chesser Island Landfill in rural Charlton County, Georgia, near the Okefenokee National Wildlife Refuge, a.k.a. the Swamp.

Should residents along Florida and Georgia’s coast be concerned? The EPA says not. Its staff ruled Agremax is “not classified as toxic, hazardous waste.” The agency promises to monitor the situation. Again, I defer to the thirsty people of Flint, “What part of lead in your drinking water is not hazardous to your health?”

It could have been worse. Bridgeport might have dumped all 14,383 tons of Agremax in the waters of Atlantic Beach. The other good news is this mishap is a “thanks-I-needed-that” slap, educating more people about the poisonous dangers of toxic coal ash.

And that’s regardless of what big-money lobbyists and the EPA think.