Penicillin gave him life and a new name

When is the last time you had a penicillin shot?

Do you remember the first time you received that antibiotic?

Charles Harvey doesn’t remember the exact day, but he knows when the wonder drug saved his life. But how did a 2-year-old toddler remember that it was 1944? The often-retold penicillin episode is a legend in his Wayne County family.

Sister Emily Harvey Lacy, who lives in Orlando, recalls the night her baby brother was “burning up with fever.”

“Mama and Daddy got a neighbor to stay with the rest of the children,” she said. “And they rushed ‘Man’ to the Ritch-Leaphart Hospital in Jesup.”

Emily said that her brother had a mysterious illness. She explained that he was drawn into a backwards circle, with the heels almost touching the back of his head. “You could just slip a pillow between his heels and his head,” she said. 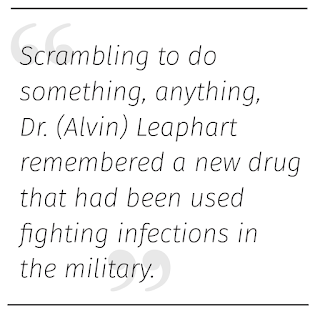 When William and Willie Mae Warren Harvey got their son to the emergency room, Dr. Alvin Leaphart and the staff went into action. The diagnosis was a deadly disease, streptococcal meningitis. Scrambling to do something, anything, Dr. Leaphart remembered a new drug that had been used fighting infections in the military.

Somehow, Dr. Leaphart recalled that. Spinning his Rolodex of contacts, the physician dialed a New York friend. Yes, there was some of the new drug available. A package arrived at the Savannah airport, and a state trooper rushed the penicillin to the corner of Cherry and Macon streets in Jesup.

Emily said that her brother and mother were quarantined for 10 weeks and three days. “We could see them behind glass,” she said, “but that was it.” Pediatrician Dr. Una Ritch assisted with the case. Her father, Dr. T.G. Ritch, was Dr. Leaphart’s partner in the hospital. 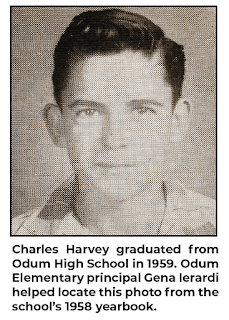 Charles said that either Dr. Una Ritch or one of the nurses bragged on his bravery while taking the shot. The legend goes that someone said, “You are taking this shot like a little man.” Two things happened during that scary ordeal. Penicillin saved the life of William and Willie Mae’s son. And ever since, Charles Harvey has been known as “Man.”

Emily said the family never strayed far from their Lanes Bridge Road residence, near her Uncle Robert Warren’s home. (The Wayne County sheriff was her mother’s brother.) Emily said that, because they were mostly homebodies, she always wondered how “Man” contracted the disease. “I did some research,” she said. “I read that pigeons could be carriers. Daddy had a big pigeon hotel, up on a pole, in the backyard. But who knows?”

Man and Sylvia, his wife of 45 years, live near where he was stricken with meningitis. Today, he is believed to be the first civilian in Georgia to receive a dose of penicillin.

Years later, the 1959 Odum High School graduate had to register for the military. He went to get Dr. Leaphart’s signature on a health record. Man said the doctor “just shook his head in disbelief, when he saw me standing there.”

Back in 1944—as the Harveys were leaving the hospital—Man said Dr. Leaphart remarked, “Mrs. Harvey, your son will live, but he will never have his right mind.”

And 77 years later, that memory brought a laugh to the retired auto salesman.