What are your Father’s Day memories?

If you come to my office, you can tell that I like to see and touch things from the past. On the wall behind my desk are two framed maps of Decatur County, in the southwest corner of Georgia. Just above the Florida line is a tiny dot. Recovery is where my father was born on Feb. 8, 1922.

Granddaddy NeSmith was a railroad man. Several of his children were born in “section houses” along that stretch of tracks. When the railroad abandoned its right-of-way, Bainbridge businessman Alec Poitevint bought Big Dink’s birthplace. I served on the University System of Georgia’s Board of Regents with Alec’s wife, Doreen. When I completed my year as chairman, my friends gave me the now-cherished framed maps.

My father may have died on Sept. 21, 1998, but he “lives” with me every day. Not just on Father’s Day. People die twice. The first time, the heart stops. The second time, the stories and memories stop. That makes my memorabilia priceless. If I stop typing and turn around, there’s Alec and Doreen’s gift. I can see and touch my family’s roots.

Over in a bookcase is a Shedd’s Dairy milk bottle. One Father’s Day my dad told our children, Alan, Emily and Eric, the significance of the glass bottle. That’s one of the key reasons that I published The Last Man to Let You Down, My Daddy the Undertaker. I didn’t want stories like this one to die. 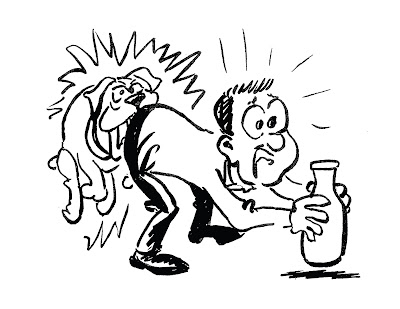 On Dec. 14, 1933, my grandmother died on my grandfather’s birthday. Thanks to the ingenuity of their teenage sister Sue, the NeSmith boys—James, Dink and Johnny—were kept out of foster homes and orphanages.

Sue worked the phone company’s night shift and got home to have breakfast ready. When the brothers walked to school, she napped. She awoke to prepare their lunch.

After school, there were more deliveries to earn the $1.25 a week. While on the job, you could drink all the milk you wanted. “What counted most was being able to take home a quart of milk every day,” my dad told Alan, Emily and Eric.

“Tell them about the bulldog,” my mother urged.

When Aunt Sue retired from Southern Bell, she purchased the home of Mr. and Mrs. Roswell Majette, Ros Murphy’s grandparents.

The Majettes were on the milk route, and they had a bulldog that slept on the front porch. For safekeeping, the milk had to be put inside the screen door.

“Every time I went on her porch, I tried to keep an eye on that bulldog,” my dad said. One morning when he leaned over, the dog chomped between Big Dink’s back pockets. Mrs. Majette heard the commotion, and she rushed to see whether my dad was hurt.

“She wanted me to show her where the dog bit. I refused, so she insisted I go see the doctor,” he said. “They locked up the dog to see if I was going to go mad.”

“Did you go mad?” Emily asked.

“I sure did,” her granddaddy said. “The doctor painted my behind with Mercurochrome and charged me $3. It took me three weeks to pay the bill!”