Summertime is farm-camp time for grandkids

a Trailways bus, probably between Camilla and Ray City. I was going home to

Jesup, after an annual visit to my grandmother’s Baker County farm.

On a Dog Days’ morning—along Highway 37—I had an epiphany. I didn’t know how or when, but I knew that one day I would live on a farm. Going to Nanny’s farm in the summertime was more exciting than whatever was under the tree on Christmas morning.

Memories of the past Memorial Day weekend made the decades of waiting a bargain. The peals of laughter echoed across our farm pond. Catfish, bass and bream had to duck into hiding places. Ditto for the snakes and turtles.

Our eight grandchildren had invaded the emerald-green waters. A few were fishing. Others were having a raucous-good time swimming, splashing or boating. Only thirst and hunger could pull them to the picnic pavilion.

Nanny didn’t have a swimming hole, but she had wide-open spaces to run barefoot.

The only times that I wore shoes were in the barn, where you had to watch where you were stepping, and when we went to Pilgrims Home Primitive Baptist Church.

There weren’t many rules. Tops on the list were proper manners and respect. Next, I couldn’t interrupt Nanny when her soap operas were flickering on the snowy screen of her black-and-white TV. That also included when my mother’s mother was rehashing—on the party-line phone—the “soaps” with her friends. 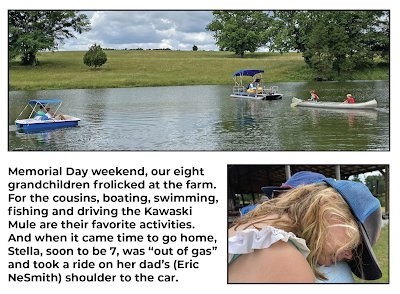 We don’t watch soap operas or share a phone with our neighbors, but the rules are light for our grandchildren. Courtesy and safety are required. Otherwise, I want our seven grandsons and granddaughter to be as excited about coming to the farm as I was going to Nanny’s.

Wyatt, Hayes, William, Henry, Fenn, Bayard, Smith and Stella know the real camp director on our farm is their grandmother, affectionately called MyMa. Since Wyatt, 17, was the firstborn, he got to pick Pam’s pet name. I’m Grandpa, the support staff. Priorities include keeping gas in the golf cart and Kawasaki Mule, along with charging the trolling-motor’s battery on the pontoon boat.

Fifty-two peanut seasons ago, I married a Mitchell County farmer’s daughter. Pam enjoys digging in the dirt and watching our critters graze as much as I do. And when grandkids come for summer “camp,” MyMa is a miracle-worker. Her creativity and patience are gold-medal-worthy. She can make a game out of pulling weeds, but she has a competitive streak. In a driveway game of H-O-R-S-E, she’s quick to dial up her high school basketball prowess. Occasionally, though, she’ll pull back and let a grandkid “taste” victory.

Nanny and I didn’t shoot backyard hoops, but I loved tasting everything that came out of her kitchen. (Well, as our grandkids would have said back then, “Rutabagas aren’t my favorite.”) Our eight’s grandmother could rival Nanny’s culinary acumen. Pam knows their individual favorites, so that she can make mealtimes special.

So much has changed over the past 60-plus years. But as a grandpa, I am determined that some things never change. Our farm will forever be a place where grandkids can kick off their shoes and soak up the outdoor adventures.

Trailways doesn’t run to Smithonia. I doubt it ever did.

But our summertime campers know the loving arms of their grandparents will always be open—camp time or any time.

And for sure, Grandpa will have to share two of his 1950s-favorite treats: Popsicles and Juicy Fruit.