My journalist friend’s prayer for 2021

The year was 1973. Robert was 22.  I was 24.  I used to joke and call us “boy publishers.”  But Robert Williams was a veteran compared to me.  He’d always wanted to be a newspaperman.  That’s why he dropped out of UGA to become the publisher and a partner in The Blackshear Times.

As for me, the inspiration to inject ink into my veins was almost by happenstance, courtesy of Elliott Brack and Dr. Lanier Harrell at the Wayne County Press in Jesup.  In our youth, Robert and I compensated for our lack of experience with enthusiasm and drive.

Robert got a call from a banker in Callahan, Florida.  The community’s weekly newspaper was for sale.  Robert phoned me.  We jumped at the chance. Within days, the “boy publishers” were sitting in the president’s office of the Nassau County State Bank.

When the banker agreed to loan us 100 percent of the purchase price, I added, “And we are going to need some operating capital, too.”  We got another $5,000 to put in our cash register.

Along the way, Robert sold his interest in the newspaper, but not before we learned some nightmarish lessons about absentee ownership.  But that’s a story for another day.  Fast-forward to 2021.  Community Newspapers Inc. now owns the Nassau County Record.  I am co-owner of the parent company, along with my partner, Tom Wood. 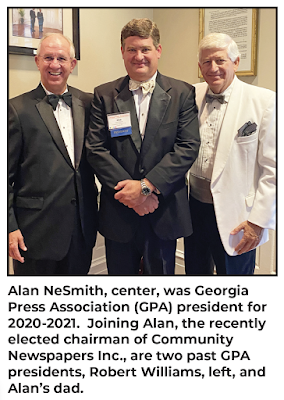 On July 29, 2021, members of the Georgia Press Association (GPA) gathered on Jekyll Island for its annual convention.  In 1980 Robert became the youngest president in the GPA’s history.  In 1981 I became perhaps the second-youngest president.  Forty years later, my older son, Alan, presided over this year’s convention.  (As a footnote, Pam was expecting Alan when Robert and I were buying the Record 48 years ago.)

And as the 134th GPA convention opened, neither Robert nor I are “boy publishers.” My now-silver-haired friend—as a past president of the National Newspaper Association—is a statesman for our industry.  Standing at the podium, he asked us to bow our heads. Robert’s invocation reflected his wordsmithing mastery in a way that said exactly what needs saying today:

“At a time when faith and belief in the obvious are readily challenged … at a time when trust and dependability can be difficult to place … at a time when people are desperately in search of a constant true direction … let us remember that we follow a profession that has been built for decades of inerrant guidance of facts, the inevitable correctness of core principles that have endured:  things like clarity, accuracy, fairness, truth and independence.

“May we always remember the supreme test of good journalism is the measure of its public service, and let us understand that good journalism has always been challenged.  Fortunately, today’s challenges are too often built upon the mistaken assumption that speed, quantity and easy availability of information can override the most basic of standards, like accuracy and fairness.

“Let us understand our jobs of providing proven fact, though often ridiculed and mistakenly blamed, are nevertheless more important today than ever.  Let us never forget that words we write must appeal to the core good sense of the individual and not the collective madness of the many.

“Our Creator told us, ‘Ye shall know the truth, and the truth shall make you free.’  Let us continue our relentless pursuit of that truth.  Bless this food so that it may nourish and strengthen us for the constant struggle where so many depend upon us.”