One of the biggest words in our vocabulary is one of the smallest. The two-letter word can determine success or failure. I am talking about “if.” Consider these “ifs”:

§  If Alabama’s Coach Nick Saban hadn’t substituted freshman quarterback Tua Tagovailoa in the second half, Georgia might have beaten the Crimson Tide in the 2018 national championship game.

§  If Stetson Bennett IV were 6 inches taller and 30 pounds heavier, the pro scouts would have him in their NFL-draft crosshairs.

As we all know, Georgia was sensational in the Rose Bowl, beating Baker Mayfield and his Oklahoma Sooners. But soon thereafter, Alabama got to wear that championship hunk of finger metal.

And we know Stetson Fleming Bennett IV is 5 feet 11 inches and weighs a chiseled 190 pounds. Even the ESPN announcers noticed his beefed-up biceps.

To no one’s surprise, Stetson is not on the 2021 Heisman Trophy watch list.

But do you think the senior backup quarterback is worried about those snubs?

Not in the least. 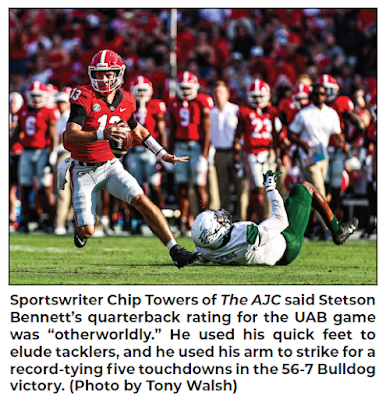 If Stetson were playing for a Division II college football team, he’d likely be an All-American. Instead, he’s a third-generation quarterback with the mental and physical toughness that repels all notions that he can’t compete in Division I’s SEC.

When quarterback Stetson was lighting up Pierce County High’s scoreboard, I had breakfast with him and his dad. Sitting in a Mayflower Restaurant booth in downtown Athens, I could see the hunger in his eyes. The eggs and grits couldn’t satisfy his appetite. Stetson’s hunger was to wear the Red and Black.

Fast-forward to last Saturday. You could see Stetson’s I-want-to-be-a-Bulldog hunger on Dooley Field, “Between the Hedges.” As naysayers will do, I heard, “Yeah, but it was only UAB.” Maybe so, but his passes—10 of 12—were laser beams, producing a record-tying five touchdowns. If he had stayed in the game, he probably would own the record all by himself.

There you go, that “if” factor again.

Saturday night will be a tougher test. Regardless of their low ranking, the South Carolina Gamecocks always give us trouble. And if the Dawgs’ number-one quarterback JT Daniels returns and stays healthy, Stetson may have had his last start of his UGA career.

But back to the “it was only UAB” comments. Here’s what Coach Kirby Smart said of Stetson, “He’s always had great composure, great athletic ability and a great understanding of the game. He’s a winner.”

That’s a Dawg-gone good way to reward a walk-on athlete who did not give up on his yearning to wear the Red and Black. Stetson’s scholarship came the old-fashioned way. He earned it.

Yeah, five touchdown passes—in any game—is something to talk about in the Bennett family for generations to come. And that 20-yard scramble was a 1950s flashback of Stetson’s granddaddy Buddy Bennett’s gridiron elusiveness.

Stet, I am proud of you.

If the Bulldogs need him again, write this down, too.

Stetson will be ready.

No ifs, ands or buts.