Hunt for the near-perfect September Saturday

On a Jack Frost night—somewhere back in the 1950s—I was sitting on a log, around a hunting-camp fire. Uncles Joe and Billy had let me tag along. There I learned that the best part of the hunt came after the hunt. I didn’t know what camaraderie was. But I knew that as I listened, my sides were hurting—in a good way—from laughing.

​     One of the men interrupted a rare pause in the banter with a pronouncement. He lasered a stream of Bull O’ the Woods chewing tobacco that made the amber coals hiss. Using the back of his hand to wipe the brown stain from his lips, he looked at me and said, “If you hunt with your boys when they are young, you won’t have to hunt for them when they get older.”

​     His name has long since been a mystery, but not his logic. Years before I became a father, I knew our children would get introduced to the woods and waters at the earliest opportunities. And when grandchildren started arriving, we launched into making those kinds of memories, again. 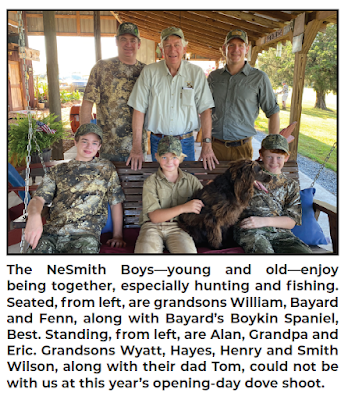 ​     Alan, our older son, once said, “Dad, you never have any fun.” I countered, “Oh, but I do. I don’t have to pull a trigger or pull in a fish to have fun. Helping you, Emily and Eric have fun is an absolute thrill.” And they know I am going to take too many pictures, so that we can savor the memories over and over.

​     Labor Day weekend was one of those occasions. Dove season opened. Long before the sun poked its head over the magnolias at the gate, I was lighting the blue flame under a 10-gallon pot of green Hardy Farm peanuts from Hawkinsville. With plenty of heat and a tad too much Morton salt, the peanuts would be ready when the dove hunters came from the field.

​     And that’s when the fun kicked into overdrive. Boys of all ages—and some girls and ladies—start telling what did and what didn’t happen during the sunrise shoot. Facts should never ruin a good hunting or fishing story. The bigger the yarn, the better the laughter.

​     I stood back, listened and smiled. Grandsons, brothers and a cousin jabbered, punctuating their stories with animated gestures. The only disappointment was that Emily and her husband, Tom, and their four boys, Wyatt, Hayes, Henry and Smith, could not be with us and take part in the camaraderie.

​     For the late-afternoon return to the dove field, I joined 10-year-old Fenn at a round hay-bale blind. He was patient as I preached the same safety sermons that his dad, Alan, and Uncle Eric had heard. Rather than give shooting tips, I decided to wait and watch. Bang! Bang! Two doves dropped. No advice needed. How much more fun can a grandpa have than watching that?

​     But if you care anything about college football—especially the Georgia Bulldogs—you knew the game in Charlotte could be the icing on Saturday’s cake. The Dawgs were aiming to declaw the Clemson Tigers. Indeed, the game turned out to be a nail-biter. But we chewed boiled peanuts instead.

​     Standing in a hot shower, just before midnight, I thought about what the oldtimer had said so many years ago in Baker County’s backwoods. I am grateful that Alan, Eric and son-in-law Tom endorse the tobacco-spitter’s hunting philosophy, too.

​     What a near-perfect September Saturday.