Some split-second decisions are easier than others

How long is a split-second?

Not long enough to dodge a bullet, unless you are Superman or Wonder Woman.

How about a rock hurtling at your windshield? Is a split-second long enough warning to get out of the way?

Not for normal humans driving 65 mph.

That’s what happened to me. I was lagging back, at a safe distance and driving the speed limit, behind a dump truck on a four-lane municipal bypass. And then, I caught a glimpse of flying gravel. Because I was in the outside lane, I steered slightly to the right, without jerking. But not far enough.

In the driver’s-side lower corner, a sunburst crack appeared. And then like spider veins, the damage spread. Overnight, the cracks had crept farther and farther toward the center.

What to do then?

Even though I had the name and telephone of the dump truck’s owner, I figured it be a waste of time to seek reimbursement for damages. I had run into that kind of dead end when a Georgia DOT gravel-spreading truck broke a side window on my truck. Our vehicles were crossing a bridge over I-20 at the same time. Trapped, my truck was got peppered with small rocks.

When I called the DOT, I was shuffled off to a third-party claims handler. The voice on the other end of the line said, in a matter-of-fact way, “DOT can’t be held responsible. Do you know how many claims it would have?” After a little more insincere baloney, I heard the final answer.

This time, I didn’t waste my breath. I called Safelite AutoGlass. Within minutes, a flurry of emails and text messages cascaded into my cell phone. An appointment was set up for Saturday. A mobile technician would come to the farm and replace my broken windshield. An estimated afternoon-arrival time between 1 and 6 p.m. was given.

And then Saturday morning, I got another notification. The technician would be arriving at 11:35. I drove to the gate at 11:34, as Safelite’s van was turning in. How many times have you and I waited and waited on a scheduled repairman? 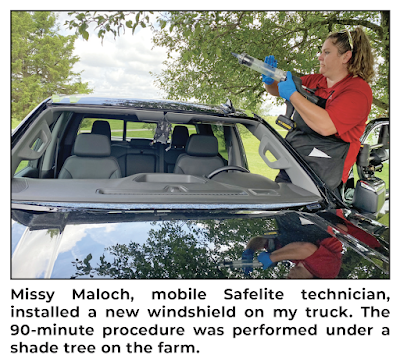 Well, this wasn’t a repairman. It was a repairwoman. With a brief and cordial introduction, Missy Maloch went to work. She said I could watch if I wanted to do so. In between my chores, I stopped by the shade tree to see what she was doing. With surgical precision, Missy extracted the destroyed glass. She explained that the camera mounted on the windshield would need to be re-calibrated. A test run on the highway would be necessary.

During our conversations, Missy said, “I’ve been around cars, with my daddy, since I was 5.” She tried working in Safelite’s warehouse once, but she wanted a job that was more hands-on. Today she’s the company’s only female installer in Georgia. And she’s not just good. Missy is very good.

After 90 minutes of nonstop procedures, Missy handed me my keys. With a smile and a wave, she drove off to spend the rest of the day with her husband and two children. It was Saturday after all.

So how long does it take to realize that you just received superior customer service?