The difference between littering and pollution?

Saturday’s farm chores evolved into a civic-responsibility lesson for our 9-year-old grandson. We were scampering around, checking things off the list. One regular unpleasant task is cleaning up other people’s messes.

But rather than fume about it, I decided Bayard could benefit from helping pick up the trash outside our fence, along the highway right-of-way. He never balked or complained because he knew there’d be a reward—driving the Kawasaki Mule, once we were back inside the fence.

I am never amazed at what people toss from their vehicles. Saturday’s winner for the most identical items were losing Georgia Lottery tickets. A half-dozen slips were wadded up and tossed in the ditch.

Natural resources and the environment are big topics in our family. There’s nothing our eight grandchildren enjoy more than romping in the woods and waters. They know which snakes to leave alone, and most aren’t timid about catching the safe crawlers to show you what they found. I never knew how many different salamanders there are. And the grandkids know the value of taking care of nature.

As Bayard and I were doing our roadside chore, we talked about littering and pollution. “Grandpa,” he asked, “what is the difference?” My best explanation was, “They are cousins. Both are the result of irresponsibility.”

I asked the fourth-grader whether he knew about coal ash pollution. He nodded and said, “I’ve heard y’all talk about it.” Six years ago, there wasn’t much talk about toxic coal-ash. Today it is different. There’s plenty of conversation, but not nearly enough action to protect our health andour environment.

A perfect case in point is Georgia Power’s plan to cap in ­place about half of its estimated 92 million tons of coal ash in Georgia. An example is Plant Hammond’s Ash Pond 3 near Rome. The prudent approach would be to remove the coal ash and put the toxic waste in lined pits, away from water.

That’s not what the behemoth utility wants to do. Oh, no. Georgia Power is notorious for expecting lawmakers and regulators to kowtow to its requests. Why wouldn’t it? Look at the past. Remember when Burger King introduced the “Have it Your Way” slogan? That’s what Georgia Power wants, its way, while winking at its own slogan: “A citizen wherever we serve.” 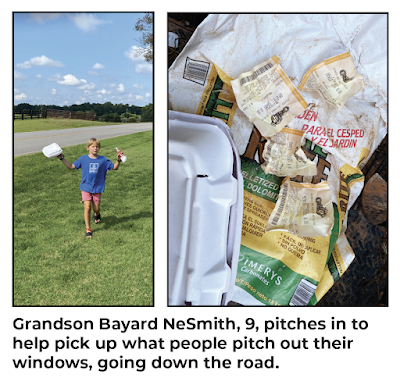 Environmental Protection Division (EPD) to approve the draining of the coal-ash ponds and putting a lid on the waste. Bundle that with a we’ll-worry-about-leaks-later attitude.

Georgia Power’s argument is that its strategy meets or exceeds state and federal guidelines. I don’t buy that. Why? The rules are tilted in favor of the polluters, thanks to countless millions spent lobbying state and federal agencies to make sure they can “have it ‘their’ way.”

During an EPD-sponsored virtual hearing on Aug. 10, regulators and Georgia Power got an earful from citizens. A growing number of Georgians have awakened to the dangers of leaving toxic coal ash sitting in groundwater, as in Rome’s Plant Hammond. If you missed the hearing, here’s your chance. Written comments can be submitted to epd.comments@dnr.ga.gov. The deadline is 4:30 p.m. on Sept. 10.

OK, back to our grandson’s roadside-civic-responsibility class. As Bayard was picking up a Styrofoam box, I asked, “Why do you think people throw stuff out of their windows?” When he wrinkled his eyebrows, I said, “Because they think they can.”

And then we were back inside the fence, with Bayard at the wheel. As the gravel crunched beneath the green Mule, my mind drifted to Plant Hammond. Why would Georgia Power want to leave a ticking environmental time bomb in groundwater when it could be defused now?

Because they think they can.