I’m not sure which word best translates to fingernails clawing a blackboard.  “Screech” comes as close as I can get.

Decades have vamoosed since I last heard that annoying sound, but a plethora of modern-day substitutes have come along since my grammar-school days.  I could make a list.  You could do, too.   How about we just pick just two: hateful political bickering and nasty quarrels over COVID-19?

If you disagree with someone’s opinion, prepare for warfare.  Here they come.  Today, there’s zero chance of my changing anyone’s mind on either subject.  This is America.  You are entitled to your own opinions.

However, when enough is enough, this 24/7 screeching starts me looking for a quiet place, a neutral zone.  There, a book—a really good book—can provide nerve-calming solace. And if I have a choice, my reading room is outside, surrounded my nature.

No wordsmith of my generation—in my opinion—is better crafting his stories than my Alabama friend and Pulitzer Prize-winning columnist/author, Rick Bragg.  I joined his fan club 20 pages into his first book, All Over But The Shoutin’.  Maybe you read his columns in Southern Living or Garden & Gun magazines.  Rick delights my literary palate almost as well as warm banana pudding after a feast of my favorite foods. 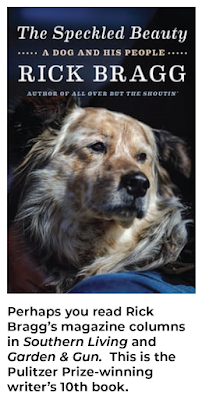 The last time Rick and I delighted our palates together, it was over plates of one of our favorites—barbecue.  He chose ribs.  I opted for chopped, hickory-smoked ham.  And, yep, we both picked warm banana pudding for dessert.  He had just finished The Best Cook in the World: Tales from My Momma’s Southern Table.  Read it and drool, over Rick’s words and Margaret Bragg’s recipes.

Rick and I agree on most things, except mules and college football.  He wants his Crimson Tide to “roll” over everybody.  My loyalty is bona fide red and black, Bulldog-style.  Rick is convinced God cursed the earth with mules so they can kick or bite you. That’s because he’s never been nuzzled by my Maggie’s velvet nose.  It was love at first sight, when the big red mare mule—with black stockings—pranced into our pasture 17 years ago.

As different as our opinions are on Nick Saban’s Tide and long-eared mules, you’ll never hear anything but playful banner between us.  Never a screech. Never.

Rick has just released his 10th book, The Speckled Beauty.  If you love animals—especially dogs—this is a story will take you a million miles away from all the rancorous noise, polarized screeching.

Another thing about Rick and me.  There aren’t enough words—his or mine—to describe the love of our mothers.  Rick’s still cooks for him.  And scolds her 60-year-old famous and not-so-healthy son.  They live on a mountainside farm, across the Georgia line, just inside Alabama.

And that’s the setting for the ragtag, one-eyed dog that picked Rick to save it from fighting other mongrels for garbage scraps in the red-dirt ditches.  But in the words of my friend, the stray dog did as much saving Rick as the other way around.

“I ran with all the grace and speed of a potbelly stove.  Over the years I had broken both legs twice and ruined one knee, and there I was, running in slow motion and leaping, sometimes whole inches off the ground.  The dog didn’t care.  The dog was thrilled.”

Bumfuzzled and disgusted with all the meanspirited war of words?

The Speckled Beauty just might help save you—albeit briefly—from the incessant screeching.