A time to give thanks and an extra hug

“To us, family means putting your arms around each other and being there.”

I am thankful our family is here so that we can put our arms around each other. And that’s no small thing.

I still shudder, thinking about the September phone call. Daughter Emily’s voice quavered as she gasped, “Wyatt’s been in a wreck.” Instantly, the much-ballyhooed, nationally televised Georgia-Clemson game was unimportant.

A suspected drunk or drugged driver had run a stop sign and crashed into Emily and Tom’s 17-year-old son’s SUV. Police handcuffed and hauled that guy to jail. The collision rolled our oldest grandson’s hand-me-down Sequoia. Thank the Lord for seat belts and airbags. With minor scrapes and jangled nerves, Wyatt walked away.

Talk about wanting to put “your arms around each other.” That’s exactly what you want to do in moments like that. But we were 90 miles away. The next 30 minutes, as Pam and I waited, seemed like hours. Finally, the phone rang.

What could have been a tragedy turned into an early Thanksgiving. Michael J. Fox said, “Family is not an important thing. It’s everything.” And all God’s children should say, “Amen!”

As a grandfather, I find that one of my life’s greatest joys is witnessing the love our grandchildren have for their siblings and cousins. When they are all together, get ready for a raucous celebration. You hope for clear skies and wide-open spaces. A Rolling Stones concert might be louder.

While I might be wearing ear plugs, I’ll be savoring every moment. Wyatt, Hayes, William, Henry, Fenn, Bayard, Smith and Stella look forward to Thanksgiving gatherings with the same excitement as Christmas morning. Their joy to be alive and their love for each other cheer my soul. 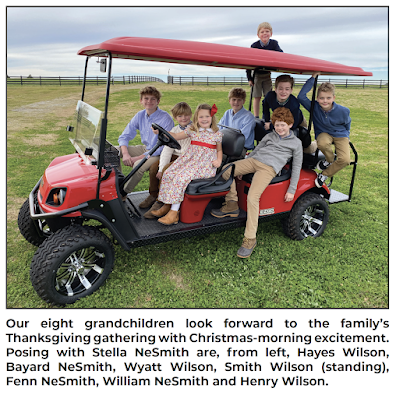 They are much too young to bog down in the adult world’s turmoil. But in their innocent way and without knowing it, they exemplify Mother Teresa’s advice. The saintly servant recommended, “What can you do to promote world peace? Go home and love your family.”

Such a simple solution to such a complex problem.

When our family’s 16 heads bow to bless this year’s holiday feast, we’ll also be praying for our world. Our grandchildren deserve hope. Yours, too.

And as we gather, with arms around each other, we are going to give Wyatt an extra hug. The flashback to September is a reminder that we don’t have to wait for the fourth Thursday in November to count our blessings.