Georgians should speak up for common sense

Right now, high-paid influence peddlers are working around the clock under the Gold Dome. Some of what they are “peddling” isn’t in Georgia’s best interest.

Throughout the General Assembly, you can find evidence where special interests, rather than common sense, are the rule. A good place to observe that is in the House and Senate committees on Natural Resources and Environment. These elected men and women have an avalanche of documents to read and digest. That’s why lobbyists for the polluters are ever ready to glaze over threats to our natural resources and environment while touting the wishes of their clients.

Mining next to the Okefenokee

Twin Pines’ lust for mining on the lip of the Okefenokee National Wildlife Refuge is a foolhardy scheme. Furthermore, digging deep holes in Trail Ridge, which borders the Swamp, would be reckless endangerment to an irreplaceable natural wonder. There’s but one Okefenokee. Where are the logic and common sense in doing anything that could cause irreparable harm?

Yes, I understand there is a severe hunger for jobs in Charlton County. But why be shortsighted and prostitute what cannot be replaced? The right approach is for Georgia’s Department of Economic Development to partner with our down-the-road neighbors and find eco-friendly employers. Among the Folkston area’s amenities are proximity to I-95, the ports in Brunswick and Jacksonville, and people ready to work. 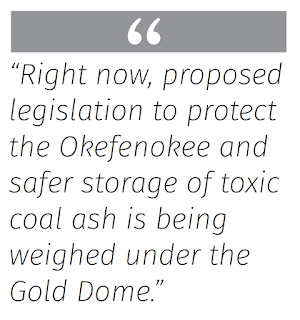 Much of rural Georgia is starving for good-paying jobs. But I’ve said this before, “I would not trust our irreplaceable natural resources to the Alabama mining company.” I hope Georgia’s environmental decision-makers will evaluate Twin Pines’ track record and rely on common sense to say, “No, thanks.”

If you want a qualified opinion about the Okefenokee proposal, email me. I will send you Dr. Rhett Jackson’s—UGA Warnell School of Forestry and Natural Resources—research paper on the ill effects of Twin Pines’ plan. The science-based facts recommend, in my words, “Don’t walk away … run!”

The state of Georgia has an opportunity to be a national example of how to responsibly store toxic coal ash. You should be concerned that the Peach State won’t win that distinction, courtesy of Georgia Power’s army of high-pressured lobbyists. The behemoth utility—the one that does so much good—is not doing such a good job of storing every ounce of its estimated 90 million tons of poisonous coal waste in an eco-friendly manner.

We’re back to those lobbyists, who are laser-focused on the General Assembly, our Public Service Commission, our Department of Natural Resources and its Environmental Protection Division (EPD). Those lobbyists have succeeded in selling their clients—Georgia Power and its parent, the Southern Company—as “sacred cows” whose bottom lines cannot be harmed.

Again, the science is clear. Coal ash is loaded with heavy metals, toxic to our health. Georgia Power has dewatered some of its coal-ash ponds. A portion of the material is stored in lined landfills. Good for Georgia Power. But the scary truth is that the company wants to leave too much coal ash in unlined pits, sitting in groundwater and leaking. Georgia Power promises to monitor the situation.

Where’s the common sense in any of that?

Georgia Power has the land and the resources to build its own lined storage facilities, away from streams and wetlands.

Right now, proposed legislation to protect the Okefenokee and safer storage of toxic coal ash is being weighed under the Gold Dome.

Corporate lobbyists are being heard.

If Georgians remain silent, shame on us.