Let’s take a stroll—back 100 years—to Feb. 8, 1922. Walking east from Bainbridge, along the railroad right-of-way, there’s a wide grassy spot. The railbed is gone. The name “Recovery” hovers, ghostlike, over the tiny dot on Decatur County’s map. Southwest Georgia businessman and friend Alec Pointevint owns the place where my father was born.

A century ago, William Henry NeSmith was born to William C. NeSmith and his wife, Annie, in a railroad-owned “section house.” In that modest, unpainted dwelling—with a woodstove in the kitchen and a privy out back—is where the couple’s fourth of five children also got his nickname.

An aunt remarked my dad was a cute “little stinker.” My grandmother objected, “My baby is no stinker.” Her sister backtracked, “Well, he’s a cute little ‘dinker.’” The “er” fell off, and that’s how I inherited my South Georgia nickname.

The last thing my grandfather purchased for his 11-year-old son, who would become my dad, was a suit to wear to my grandmother’s funeral in 1933. W.C., a railroad construction foreman, wasn’t a model father. He made good Depression-era money, but he didn’t spend it on his kids. I never heard my dad complain.

Whatever hurt that he might have carried was wrapped in funny stories and a work ethic that would exhaust the average person. He once told me, “We might not the be smartest or richest, but we can be ladies and gentlemen … and we will work.” 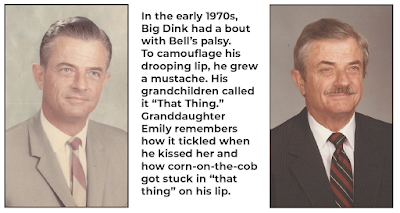 Just once, I saw my daddy’s chin quiver. Big Dink confessed that he grew up never hearing his father say, “I love you.” Dink NeSmith Sr. didn’t pass on that cold emotion to his children or grandchildren. He was eager to express his love.

As he lay dying from cancer in our home, three generations of his family surrounded him. The last thing that he heard was a chorus of “I love you.” And with a weak squeeze of his hands, the final words from his lips were a whisper-like “I love you.”

Many people have influenced my 73 years. Foremost were my parents, Dink and Margie NeSmith. Another irreplaceable mentor was the late Dr. J.W. Fanning, co-founder of Leadership Georgia. I never really knew my grandfathers. Dr. Fanning, a retired UGA president, filled that void. We spent untold hours together. I disciplined myself to listen more than talk. Two things that I heard often were—in his soft and syrupy Wilkes County drawl—“may you stay alive as long as you live” and “only words live forever.”

Dr. Fanning’s words inspired me to write a 323-page memoir, The Last Man to Let You Down, My Daddy the Undertaker. Every one of my daddy’s six grandchildren got to feel the tickle of his mustache as he kissed them and said, “I love you.” They know that on Feb. 8, we will remember him on what would have been his 100th birthday.

I pray those words and the memories of “my daddy the undertaker” will live forever.