The bridge leading to their first Valentine’s Day together

With each clunk of my boots on the wooden planks of Ichawaynotchaway Creek’s Erector’s Set-like steel bridge, it was as if I had stepped back in time. I counted them. Seventy-six clunks. I closed my eyes and imagined what the soldier was thinking 76 years ago.
The PFC medic hadn’t seen her since before Japan bombed Pearl Harbor. Uncle Sam’s Army and the Pacific Ocean had kept them apart. Letters and black-and-white photos had been all he’d been able to clutch to his chest. But he never forgot her dancing blue eyes, curly blonde hair and a smile that seemed to stretch from Southwest Georgia all the way to the Philippines.
With his honorable-discharge papers stuffed in his uniform pocket, he rode his thumb to that bridge leading to Robert W. Woodruff’s 30,000-acre Ichauway Plantation in Baker County. The parents of the soldier’s sweetheart—the one he had romanced only through cards and letters—operated the Coca-Cola baron’s country store.
As I stepped off the bridge, I purposedly scuffed the orange sand. I wanted to kick up dust, just as I imagined the soldier had done.
Now back to 1946.
A young woman was looking out the window. She saw the dust, then the soldier. Marjorie Vines burst through the store’s double-screen doors. From the porch, she leapt into Dink NeSmith’s arms.
That’s where she’d stay for 52 years, until my dad died in 1998.
On Feb. 3, 2006, my sisters and I took our families on a pilgrimage to Ichauway, celebrating what would have been our parents’ 60th anniversary. Mae Bailey, who ran the store, was kind enough to give us a tour. Sipping ice-cold Cokes—in small green bottles, the way God intended them to be served—we listened to Mae’s modern-day happenings in the white board-and-batten store with the green roof. If only the walls could talk, too, at Hoggard Mill on the bluff of Ichawaynotchaway Creek. 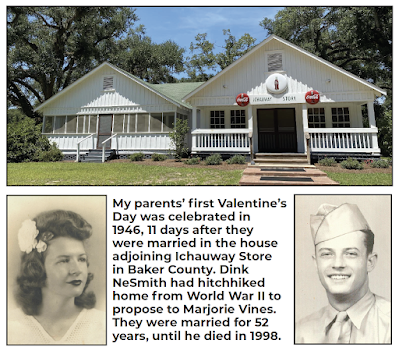 As magical as the conversation was, the real enchantment came when Mae opened the door to the adjoining house. That’s where my grandparents and my mother once lived. In the kitchen, Mother told of the night my dad proposed. She was washing dishes. He was drying, trying to get up the nerve to ask her to marry him.
Margie could see the jitters in Dink’s face. And she could see that he was really wringing the drying cloth on the handle of a China coffee cup. Just as he was about to pop the question, oops, the cup’s handle popped off. Embarrassed and blushing, Dink blurted, “Margie, will you marry me?”
Children and grandchildren alike, we had a laugh before Mother led us to the living room. “It was here, in front of the fireplace,” she said. “This is where we were married.” I had come prepared. Setting an old-school boom box on the mantle, I pushed a button. Mother and I danced to “their song,” as Bing Crosby crooned “I love you truly.” I imagined how happy they were in 1946.
Every time that I am blessed to visit Ichauway, I don’t leave without walking across the wooden planks of the steel bridge. I want to hear the clunks. I want to imagine what it was like for my dad, the coming-home soldier, on his way to that store.
And to have his blue-eyed, curly blonde and smiling Valentine jump into his arms.