Little boy has a big idea to help Ukraine

Bombs, bombs and more televised bombs. That’s what Smith saw when he closed his eyes. And the fact you are only 9 years old doesn’t mean you can’t do something to help the suffering people of Ukraine.

Day after day, the yearning to help the war-ravished people on the other side of the globe burdened young Smith Wilson. The third-grader prayed and pondered. And after several weeks, his prayers were answered. He would raise money to send overseas.

That’s when Smith learned of the United Methodist Committee on Relief. Money could be raised in his small hometown of Senoia, Georgia, for the Methodist churches in Ukraine. The youngest of four sons, Smith has always had to be a quick thinker to stay up with his older brothers, Henry, Hayes and Wyatt.

What was his idea?

Smith decided to harness his never-met-a-stranger personality and his 240-volt energy with the marketing skills of his mom, Emily, and the baking savvy of his paternal grandparents, Mike and Gwyn Wilson. Presto, Poundcakes for Peace was born.

“Papa” and “Mimi” Wilson were recruited. After all, Smith declared, “Mimi makes the best pound cakes in the world.” His papa’s culinary skills are legendary, too. An added plus was his Georgia Tech granddaddy’s engineering acumen. Production would need to be streamlined. And that’s a good thing.

On the first Sunday of spring, Smith—all 4 feet 10 inches—stood tall in the pulpit of Senoia United Methodist Church. He said Ukrainians were hurting. He wanted to help them. He asked members of the church to help, too. Smith outlined how he felt led to do something, anything that would guarantee 100 percent of the money raised would go to 17 Methodist churches over there.

Then Smith announced, “After the service, I have free samples of ‘the best pound cake in the world.’ Outside, I will be taking orders. I hope you will help me help the people of Ukraine.” Sure enough, with the help of his mom and dad Tom, he had tiny squares of pound cake speared with toothpicks, ready for the tasting.

What was the response? 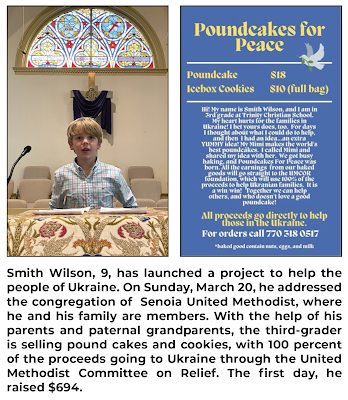 When the congregation stepped outside the historic church in Coweta County, smiling Smith was ready. Business was brisk. He sold 33 pound cakes at $18 each, or $594. He took orders for more. Add to that another $100 worth of Mimi and Papa’s icebox cookies for a total of $694. And that was just the first day. He went to sleep Sunday night, dreaming of his upcoming marketing blitz. Smith may be a little boy, but he thinks big.

You might wonder how I know about this 9-year-old’s ambition to make a difference on the other side of the globe. Pam and I have known our seventh grandson, Lamar NeSmith Wilson, since the day Smith was born.

We also know that this blond, blue-eyed altruistic entrepreneur has a big heart. If Smith Wilson stepped on the scales, he’d weigh 80 pounds. But if you asked his family, we’d say about 70 pounds of Smith is his loving heart.