Big Dink went to his grave never knowing the names of two Georgia state patrolmen who came to his aid. That bothered me for more than 60 years. A pair of telephone calls—14 years apart—have solved the mysteries. One for certain. The other, most likely.

NeSmith Funeral Home’s phone rang. No one had died. Just the opposite. A very pregnant Mrs. Francis Corry pleaded, “Come quick. I’m having a baby.” Big Dink jumped into his metallic-blue ambulance and raced across the Altamaha River into Long County.

With Verla Corry loaded on the stretcher, he turned on the siren and the rooftop beacon and headed to Ritch-Leaphart Hospital. Halfway to Jesup, labor pains turned the expectant mother’s moans to screams, “It’s coming! It’s coming!” The former World War II medic knew there was only one thing to do—pull over and deliver the baby.

When a state trooper saw the ambulance on the side of the road, he stopped. Looking in the window and seeing my dad holding the newborn, he said, “You’ve got your hands full. I’ll drive you to the hospital.” In the excitement, Big Dink never found out who the blue-uniformed Good Samaritan was.

My dad died in 1998. The first and only baby he delivered, David Corry, died in 1993. In 2008, I did what I should have done decades earlier. I wrote a column, asking our readers to help solve that mystery and another. Before the ink had dried, retired trooper John Hammock called, “I’m half your answer.”

John had been the volunteer ambulance driver. You might not have known him by name, but John’s stern face was once on billboards across Georgia with the stern message “I have a very low tolerance for drinking and driving.” The morning John called, he wasn’t stone-faced. He was laughing and grateful that he could help. When John died, he knew that I was grateful, too.

The other mystery happened in 1960. I was 12 years old and working at Pope’s Texaco. I overheard a customer announce, “Dink NeSmith almost got killed a while ago.” I dropped my car-washing rag and ran to get closer to the conservation. 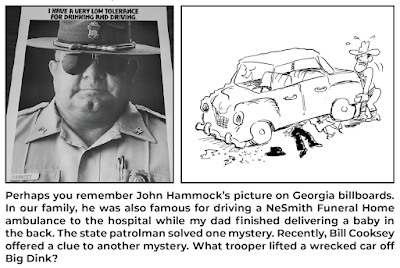 The man said the undertaker had answered a wreck call in his ambulance. Two sisters had flipped their car. One of the girl’s arms was pinned. A group of men on the scene lifted the automobile so that Big Dink could crawl under and free the young lady. In the drama, signals got crossed. The Chevrolet was dropped on my dad.

Once again, a state trooper stepped in. With a surge of strength, the officer lifted the compact car off Big Dink. Later, friends teased, “Aw, Dink, it was just a Corvair.” My dad fired back, “Oh, yeah. You could have fooled me. I thought it was a Cadillac!”

Big Dink went to Heaven with a still-sore back, but he never knew who had come to his rescue—twice. Two weeks ago, Bill Cooksey called. He’d been reading my book, The Last Man to Let You Down, My Daddy the Undertaker. My friend offered a clue to solving the second mystery.

In 1960, “Big” Bob Cannon was the trooper assigned to Wayne County. He later was McIntosh County’s sheriff. But on a sweltering summer afternoon in South Georgia, Trooper Cannon was likely the superman who rescued Big Dink. I wish that I could have talked to Bob Cannon before he died.

But I can thank Bill Cooksey for this clue and his staying on the trail to solve this 62-year-old mystery.