Riding inside a rolling sports encyclopedia

The last vehicle to pull in was a Bulldog-red Jeep, freshly tattooed with splatters of Clemson-orange clay. Its owner was just back from a rabbit hunt, with barely enough time to shower himself, let alone wash his off-road ride. I’ll tell you more about that in a minute.

The next nine hours turned into much more than a road trip—from Loran Smith’s Athens driveway—to Macon and back. We were headed to the 66th Annual Georgia Sports Hall of Fame Induction Ceremony. Every mile and every moment were as if I were encapsulated in a sports encyclopedia rolling, on four tires, down and back up Hwy. 129.

For the daylight leg of the drive, Loran—who makes the Energizer Bunny look lazy—was behind the wheel. Riding shotgun was young Athens banker and outdoorsman Daniel Moss, who volunteered to handle the late-night return, with special emphasis on dodging deer grazing in the moonlight. In the backseat, I rode with my longtime friend and UGA classmate Claude Felton.

Vince Dooley once vowed his sports information director was America’s best of the best.  As Loran does, Claude just keeps on going and going. His title has evolved into a longer string of words and responsibilities. But yes—emphatically—his knowledge of and loyalty to UGA run much deeper than Tanyard Creek, which flows beneath Sanford Stadium’s hallowed turf, “between the hedges. ”If you were to print out all the Bulldog lore that Claude and Loran store inside their cerebral hard drives, my pickup and a U-Haul trailer couldn’t transport the load.

Loran is chairman of the Georgia Sports Hall of Fame Authority. The globetrotting author of 18 books, with two more in the works, had to be at the banquet. Georgia athletes—former and current—were being honored. Attendance was a must for Claude, too.

But why was I tagging along? 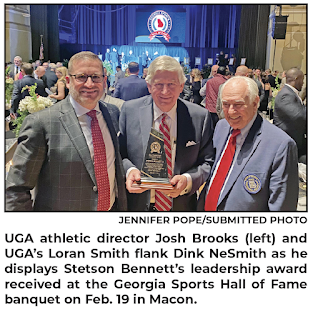 One of the honorees couldn’t be there to receive the Emily Parker Myers Leadership Award. If the 600-plus crowd was expecting to see Stetson Fleming Bennett IV step up on the stage, they were disappointed. The offensive MVP of the Orange Bowl and the national championship game had a previous commitment, so Loran and Claude conspired and drafted me.(See the box with my stand-in acceptance remarks for Stet.)

Yes, I savored seeing the Class of 2022—James Bankston, Alan Chadwick, Stewart Cink, Warrick Dunn, Deon Grant, Steve Holman, Bob Horner and Eric Zeier—be inducted. Living legends, every one. I was honored to be a “walk-on” for Stetson.

But just as memorable was listening to Loran, Claude and Daniel while rolling down and back up Hwy. 129. 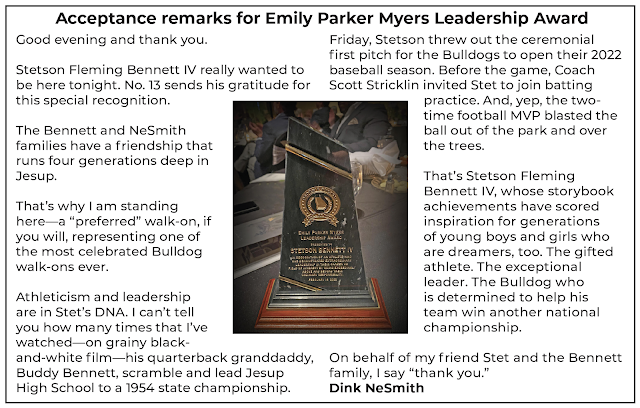