Supply-chain disruption has stayed in the news. I often wonder what I’d see if I could peek into one of those shipping containers at the ports. But what I wouldn’t see is enough colorful paper and bows to wrap my Father’s Day present this year or ever.

You can’t buy what Alan, Emily and Eric have continued giving me since their arrivals in 1973, 1976 and 1979. I’ve joked that they are our “disco babies,” born in the days of polyester double-knit leisure suits, tacky big-collared shirts and Saturday Night Fever. My dad died in 1998, but I will be forever grateful that he got to experience their love, and vice versa.

Each of our children can rattle off a litany of Granddaddy NeSmith stories. They are sharing those “gifts” with their children. Only words live forever. That’s why I published The Last Man to Let You Down, My Daddy the Undertaker. His great-grandchildren never got to feel the tickle of his moustache (Emily called it “that thing”), but they can read the words and see the pictures.

Here’s the gift from Alan, Emily and Eric that defies wrapping. It’s called love for each other and our family of 16. We have differences of opinion, but you won’t find feuds and pouting. And that carries down to their children, our eight grandchildren. Every time the cousins convene, the excitement rivals Christmas morning.

That’s a priceless gift for this grandpa.

With Sunday being Father’s Day, I am awarding blue ribbons to three fathers. First, there’s Alan, who earned his UGA degree at 30. Our oldest was also the oldest to marry. But when he did, Alan was blessed to wed Heather Hammond of Fitzgerald, also a UGA grad. Together, they are nurturing sons William and Fenn. 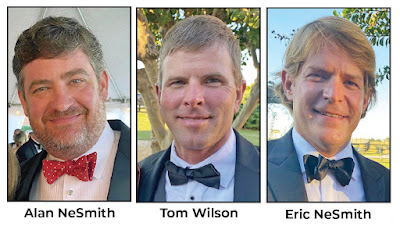 Alan carries a heavy civic-and-professional-leadership load, but he makes sure every possible moment is an outdoors adventure for his family. I doubt any boy at Tallulah Falls School has waded in more creeks, reeled in more fish, shot more doves or caught more salamanders than William and Fenn. For Father’s Day, I give the chairman of Community Newspapers Inc. a blue ribbon.

Emily NeSmith and Tom Wilson of Sharpsburg were students at UGA, but it was on the Watkinsville campus of Truett-McConnell College where they met. Sitting next to each other—in an elective music-appreciation course—I suggested that they “appreciated” each other more than the music. When Tom made an appointment to ask for Emily’s hand, I teased, “If you ever mistreat her, you should hope her brothers don’t outrun me.” What a magnificent pair they’ve made for the past 22 years.

On the day Emily announced that she and Tom were expecting a fourth son, I asked, “What were you thinking?” She fired back, “I was thinking Tom is a wonderful husband, father and provider. We are all about family.” Tom works as hard being a role model for Wyatt, Hayes, Henry and Smith as he does with his burgeoning homebuilding and residential-development company. Emily was right. Tom is a blue-ribbon father.

When Eric entered UGA, he aimed for the Grady College of Journalism and Mass Communications. At the same time, he declined an invitation to walk on to Coach Jim Donnan’s Bulldog football team. His grandfather, my dad, was terminally ill. Eric had lettered in four high school sports, but he valued family time more.

Our youngest traveled to Europe to find the love of his life, a Memphis belle. Eric and Connell Sullivant were in a study-abroad program in Innsbruck, Austria. When they stepped onto a Berlin-bound train, the two journalism students were strangers. But when they stepped off, well, the rest is history. Connell, with three UGA degrees, is the scholar among us. Eric and Connell are a team, balancing their careers and family time with son Bayard and Stella, our only granddaughter. For Father’s Day, I also give Eric, the James Beard Award-winning magazine publisher, a blue ribbon.

That’s right. I don’t have to wait for Father’s Day to unwrap my presents. There’s never been a supply-chain disruption of love. I get those gifts every day. Besides, there wouldn’t be enough wrapping paper and bows.