Llamas add adventure to the farm

Llamas get a bad rap as spitters. Yes, if provoked, they will spit. If a llama’s banana-shaped ears go back, and it starts gurling, watch out. I should have known better than to get too close to Georgette’s new baby, Dalai.

But in 25 years—just once—have I had a water-hose shower in the barnyard. The stuff does wash off. And soap helps the smell go away, eventually. I know some people with worse personalities. Don’t you? And a water hose won’t help them.

Our llama saga began—in the late 1990s—when Alan spotted two llamas for sale in the newspaper’s want ads. “Hey, Dad,” he said. “These llamas are cheap. Why don’t we get them?” After a phone call, we were hooking up the livestock trailer. We are now into the adventures of our third generation of llamas.

Llamas grow shaggy coats. They need to be groomed, annually. Finding a groomer isn’t always easy. In fact, our five llamas were getting beyond shaggy. Blame it on the pandemic, but our regular llama shearer has been unreachable for two years.

Farm visitors marvel at our llamas. Earlier this year, quite a few have said, “I never knew llamas could be peach-colored. I thought they were mostly white.” Yes, they are. Some of ours also have brown spots. But up until last month, we had peach-colored llamas because they had been rolling in dusty orange clay. 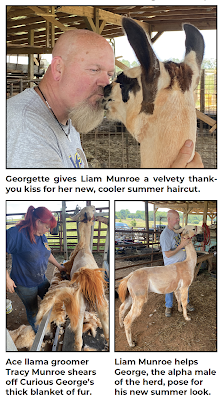 But back to the grooming.

The llama gods smiled on us, and we connected with Tracy Munroe and her husband, Liam, from Dallas, Georgia. When they pulled up in their van and started unloading equipment, I knew this wasn’t their first llama rodeo. Shearing isn’t all Tracy does.

She owns Wit’s End Llama Consortium. She and her personal herd of llamas attend weddings, parties, photo shoots and assorted other activities. So, if you want a llama to be the ringbearer at your wedding, Tracy has what you need. Crowds don’t spook her trained llamas. The llamas even ride hotel elevators to get to special events.

Our llamas weren’t getting gussied up for a wedding. They just needed those heavy fur blankets off their backs. Tracy and Liam had the procedure choregraphed perfectly. Georgette even offered Liam a few velvet-lipped smooches. There was only one moment of unexpected drama.

Baby Llama Bean didn’t believe he needed a haircut. As Tracy moved to put a halter on the 5-year-old, he bolted and cleared a 5-foot barn gate. I knew what to do. A rattling feed bucket is the trick. Bean trotted behind me, all the way to the “barber’s chair” for his trim.

By the time Tracy and Liam had their van reloaded, we no longer had peach-colored llamas. Our four boys and a girl were looking dapper with their summer haircuts.

And how many times did they spit?