Evil strikes ‘the most American place in America’

“In a world gasping for a breath of civility, I woke up Aug. 5 in a southwestern New York oasis, not too far from Niagara Falls.  Strolling down winding red-brick paths, shaded by a canopy of trees, I heard voices—with divergent views—spilling from wraparound verandas and upstairs porches.  But what I didn’t hear were angry tones.  Other than applause, the loudest commotion came from gaggles of kids, cackling as they pedaled by on their bikes.

“For the first 24 hours, I wondered whether I was dreaming.  And then I learned more about this place that’s just below Canada and very near Lake Erie.  The Chautauqua Institution is celebrating its 144th anniversary.  In 1905, President Theodore Roosevelt called it ‘the most American place in America.’”

On Aug. 22, 2018, I wrote those words, after my introduction to the Chautauqua Institution.  I was smitten with its natural beauty and architecture.  Chautauqua’s 750-acre campus was like walking in a flower garden. Color was bursting everywhere, as was laughter.  The people—diverse in every way—were just as beautiful.

That’s why I adopted Louis Armstrong’s “What a Wonderful World” as my soundtrack for the eight-day visit.  With each step, I could hear Satchmo’s raspy voice: “Yes, I think to myself … what a wonderful world … Oh, yeah.”

I am among the stunned, trying to absorb the raw fact that evil people are masters—in their ghoulish ways—of turning beautiful dreams into grisly nightmares.  Hadi Matar—armed with hatred and a knife—went to Chautauqua on an evil mission. On Aug. 12, he planned to murder the controversial, famous author before an estimated 2,500 eyewitnesses.

In 2018, I sat in that open-air auditorium, never imagining what might happen four years later.  Now, I have some confessions:

§  While I have read enough books to fill several rural bookmobiles, I have never read The Satanic Verses.

§  Furthermore, I had never heard of its author, Salman Rushdie.

§  I know even less about Islamic radicalism.  Therefore, I had no idea why some Muslin leaders had placed as much as a $3 million bounty on Rushdie’s head.

§  I would also be ignorant about Chautauqua if it were not for our friends Erroll and Elaine Davis.  Erroll was chancellor of the University System of Georgia when I was appointed to the Board of Regents. They have a Chautauqua home, and we were their guests there. 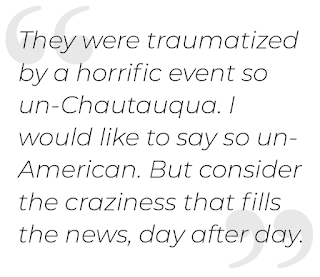 When I learned the news of Rushdie’s attack, I reached out to our friends.  Sure enough, Elaine was in the audience. Matar was sitting on the row in front of her when he sprinted to the front, vaulted onto the stage and assaulted Chautauqua’s guest. Elaine said it was jab, jab, jab and blood everywhere, before patrons and staff could subdue the enraged villain.

Only by a miracle has Rushdie survived.  He knew of the threats on his life. But through the years, he has chosen to not cower.  As a writer, he embraces America’s First Amendment, protecting free speech. Obviously, Hadi Matar, the would-be assassin, and certain Muslim compatriots do not.

Sadly, Salman Rushdie was not the only victim.  My friend Elaine and everyone in the audience were, too.  They were traumatized by a horrific event so un-Chautauqua. I would like to say so un-American. But consider the craziness that fills the news, day after day.

Remember how the whacko, with the shoe bomb, changed air travel forever?  And then came 9/11. Evil lurks everywhere, even in “the most American place in America.” Chautauqua and its uplifting wholesomeness have been victimized, too.

Civility is a victim of that sharp blade, too.

Say it ain’t so, Satchmo.