The real-life Energizer Bunny is from Wrightsville

I know a real-life Energizer Bunny.

No, he’s not Herschel Walker.

But if you were a Georgia football fan—before and after the Herschel Walker Era—you heard the Voice of the Bulldogs growl his name over and over.

Munson is in Dawg Heaven, and Loran Smith is no longer on the sidelines. But he’s “got” plenty. He is a sports-knowledge vault. Sanford Stadium’s press box couldn’t hold all his stored trivia. For example, he’s written five books on the Masters. If his contacts were put on an old-school Rolodex, it’d weigh 100 pounds.

Loran Smith left Wrightsville, in 1956, to run track at UGA. He’s not stopped running since. When I call my friend, I ask, “Are you going or coming?” His suitcase is always packed.

Last month, I called Loran. He was in Maine, next to the Canadian border. He was visiting friends. But he was also dreaming about another book, chronicling U.S. Hwy. 1 from Maine to Key West. That’s classic Loran, Wrightsville’s own Energizer Bunny.

How many books has Loran written so far?

He doesn’t keep count. But last night when we talked, he guessed 19. I was holding his latest, Return to GLORY, A History of the Georgia Bulldogs. Loran said it was a rework and update of a previous series to include the 2021 national championship. Who better than Loran to write the grandest chapter in the last 41 years of Dawg lore?

Coach Kirby Smart penned the foreword with an afterglow of beating Alabama in Indy. Kirby does it up right. And then, Loran rolls the gridiron clock back to Game One. As if Munson were around to growl, “Whaddaya got, Loran?” here’s how Loran kicks off Return to GLORY:

“It all began on January 30, 1892, when Mercer University agreed to come to Athens to play Dr. Charles Herty’s newly formed team. It wasn’t much of a contest, with the home team’s biggest challenge being removing rocks and smoothing out the surface of the mostly grassless gridiron. Georgia won 50-0 at a time when a touchdown counted four points, and the kick after, two points.” 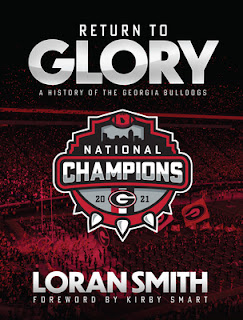 Who doesn’t know about Wrightsville’s Herschel Walker, the Heisman Trophy winner? But do you know about quarterback Richard Vonalbade “Von” Gammon’s death, which almost killed football in Georgia, too? That was in 1897. Read about it and scores of other out-of-the-vault gems.

Check out this table of contents:

Saturday, Atlanta’s Mercedes-Benz Stadium will be packed with fans of the Red and Black, barking for the Bulldogs to beat Oregon’s Ducks. A few hundred thousand others will be woof woofing at their TVs.

Before our Bulldogs take on Samford University’s Bulldogs in Athens on Sept. 10, I suggest you do some homework. Buy a copy of Loran’s new book. Savor the history, and your barks will be prouder.

With his 19th book off the press, Loran has another coming out this spring. He and Coach Smart are collaborating on another must-read for your Bulldog bookshelf.

And then one day, Loran will go all the way down U.S. 1 from Maine to the tip of Key West. Then he’ll write about it. You’ll want to read that one, too.